A book review by Tim Marchman for the Wall Street Journal that barely mentions the book has attracted a lot of attention from the comic internet, leading with the following.

If no cultural barrier prevents a public that clearly loves its superheroes from picking up a new “Avengers” comic, why don’t more people do so? The main reasons are obvious: It is for sale not in a real bookstore but in a specialty shop, and it is clumsily drawn, poorly written and incomprehensible to anyone not steeped in years of arcane mythology. 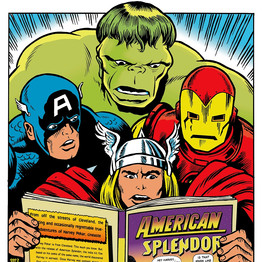 I had to include the article’s accompanying image by Mark Zingarelli, as it sums the article up nicely. I encourage everyone to give it a thorough read and chime in below.

Marchman makes a strong case for what’s wrong in today’s comic mainstream, but what can we really expect from a generation of creators who are really fanboys? While there may not be any innovation in mainstream superhero comics, is anyone looking for change? Don’t we pick up Captain America or Superman because we know what to expect?

The article ends with this statement.

The superhero comic has for decades been the fixed point around which this vital American art has revolved. It may be exhausted, but it deserves better than to be reduced to a parody of a parody of itself.