I read a lot of reprints, from golden and silver age superheroes to classic comic strips and everything in between.  How the material is presented is as important as the contents itself.  Unless published after 1990 most comics were printed on newsprint, a horrible medium that prohibited decent colour reproduction. Yes I’m Canadian and have used the proper spelling for colour throughout.

There seems to be two schools of thought on reproducing this material: keep it as close as possible to the original or go hog-wild and give the best that’s possible today.  Two examples: Tales Of Asgard with modern colourization and Young Romance keeping to the original colours. 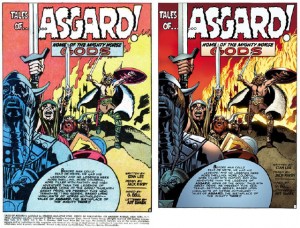 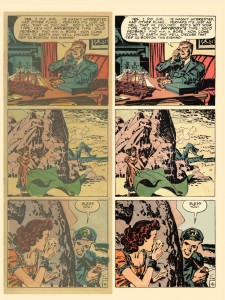 As you can see the difference is ridiculous and these two are the best examples I could locate of the polar extremes. The Tales Of Asgard re-colour ignores the original and treats the inked page as a new foundation for modern colours. The Young Romance page keeps the colours as true to the original as possible while removing the newsprint “haze”.  The former could be a comic from this week while the latter is clearly an older work.

Check out both links to get a nice overall of each project.  Here’s a quote from Michel Gagne who is working on Young Romance as a solo project.

[quote]After experimenting with various techniques for several months, I finally developed my own methods. The goal was to preserve 100% of the line art from the comics, and clean everything up so that it looked like each page was scanned from a mint, right off the press comic. If I did my work well, the restoration would be nearly invisible.[/quote]

There was similar furor over DC Jack Kirby Omnibus line: they went as true as possible to the originals and received a lot of badmouthing for it.  Is the goal of a reprint to faithfully reproduce the original in its entirety or to present the material in the best light possible?

Fantagraphics has a line of Prince Valiant books that reprint the classic strip.  Here’s a comparison of three different reprints of the same material.  1960s, 1980s and current reprints compared. 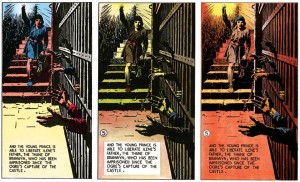 [quote]Prince Valiant benefits from an extra stroke of good luck: The availability of a nearly full set of pristine color engraver’s proof sheets of almost the entire Prince Valiant run, carefully preserved by Foster and donated to Syracuse University, who has generously provided scans of these pages for our use.[/quote]

And that’s where the line seems to be drawn: can publishers get access to the original colours via proof sheets or original art?  Otherwise how can we tell today what the artist had in mind at the time of the material’s original printing.

Food for thought.  Should reprinted material look like a reprint slightly gussied up or a new work with no ties to its former self.  Which do you prefer; chime in below.