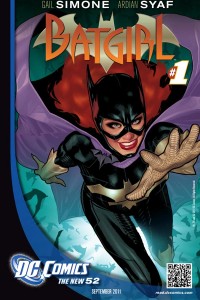 It’s been busy in the shop today, really busy. I have never seen so many people buy “one of each”. There were 13 new DC #1s today (the 1st wave of this month’s 52 new titles basically re-launching the whole DC Universe) and they’ve literally been flying off the shelves. We were one of the luckier stores, ordering heavily on most titles but not all. We’ve already sold out of Justice League International, Hawk and Dove (the first to sell out) and at last count we have 3 Static Shock’s left. Static Shock? 3? Yeah!

I’ll leave the retailing end of things in the capable hands of my partner Marc. What I’d like to discuss the potential collectability of these things.

I’m semi-knowledgeable on most things to do with the collectability of comics and this rush for the new DC 52 got me to thinking. Is this the first opportunity in perhaps 25 years for a sustainable crop of collectible comic books? I’m talking about a large group of books that sustain a collectible market price of over the cover price for a long period of time, decades! I’m not talking about lucky one offs like Chew where it’s a surprise hit and copies sell for $50 on eBay then 3 years later nobody remembers it, I’m talking sustained demand for a large group of titles and issues from this day forward.

Comic book print runs are at historic lows. Justice League’s 200,000 print run made headlines for its size yet Marvel’s X-Men #66, printed back in March 1970 was the last original content issue, and Marvel went to reprints with issue #67 and on. Now I read somewhere that the print run for #66 was 225,000 or something close to that. Marvel basically abandoned the title based on numbers that would have the execs dancing in the boardrooms today.

The DC thing is revolutionary; it basically sets everything back to zero and starts anew. Major characters that were heavily collected before this new 52 are basically starting all over again. The new Batman is unfamiliar to us, heck we don’t even know his origin yet. The print run on the Detective is most likely in the mid 100,000s. Batman titles pre the 1960s TV show were in the 400,000s and circulation during the TV show years topped 800,000. Batman fans devour these old books anytime they come to market at multiples of today’s cover prices. These are collectible comic books.

Don’t go saying “well these are old” because Rin Tin Tin’s are older and I sell those for $1.99. Demand is above supply and thus they are worth money and the demand has been sustained for decades!

What happened with the speculative boom of the late 80s and early 90s was that the massive print runs rendered the books valueless because it was impossible to sustain a demand level above say the 7 million copies floating around of X-Men #1 or the some odd million copies of McFarlane’s Spider-Man #1, or the how many ever copies of the Death of Superman.

The collecting of new comic books post the speculation bust of the 1990s basically disappeared. Batman collectors collected up to #429 and then stopped! A whole generation of comic book readers basically did not participate in the collectible comic market, they walked away from it, they stigmatized all current comics as not worthy of collecting.

Years later we see a small resurgence in Marvel’s from the mid 1990s because of their low print runs. Slowly collectors are buying into the fact that Amazing Spider-Man in the #430s are tougher to get than issues in the #330s and slowly they are getting up off $10 to acquire issues.

The DC re-launch could easily represent a platform where each and every one of the 52 #1s (and perhaps #2s and certain future origin issues, villain intro issues etc) could be worth collectible values of over their cover price even years from now. Print runs of Hawk and Dove are probably very low yet all completists will need the issue to have all 52, ditto for Static Shock (which we just sold out of by the way) and ditto for all the titles.

Marvel’s famous 1968 re-launch  was nothing more than a split of titles that were carrying two characters into titles devoted to a single character yet Iron Man #1 is worth  7 times more than Tales of Suspense #99  (the story in Iron Man #1  is actually just a continuation from the Iron Man story in Tales #99, just the title and the numbering changes).  These things matter to collectors and the big question with the new DC 52 is will the current collector slowly wade back into the possibility that current comics can be collectible and just as importantly if not more so, will there be a new crop of collectors created with the new DC.

The ebay activity is already fast and furious but unlike other ebay opportunistic moments like say Amazing Spider-Man #583 are the speculators selling themselves short by only getting $10 for a Batgirl #1? Should they sit on Batgirl #1 for a year or two?

Has there been a change in the fabric of comic space and time? Is there the possibility of a re-birth of the current collectible comic book where people buy an issue optimistic of it storing and even gaining value?