I was able to attend the Hamilton Comic Con over the weekend in Hamilton, Ontario. I had a singular reason to attend: Mike Zeck. As most readers know I am an avid collector of Artist’s Editions and thought it would be nice to get any of them signed since most are from deceased creators.

I checked the con’s site and found, after a lengthy bio, this message about Zeck’s appearance, which never provided any show information and still doesn’t. At a minimum the Con site should list what days the guests are appearing.

Anyway, I brought my Mike Zeck’s Classic Marvel Stories Artist’s Edition to the show and beelined it to Zeck’s table after consulting the well placed floor maps. I checked the table and there was a long line of prints, a book and a nicely printed price sheet listing signatures at $5.

Hmm. This required some inner turmoil and debate since at the core of it I don’t like the idea of paying for a signature on a book. I didn’t have a stack of books, just the one. With that in mind this was a reprint of older material from a company that didn’t originally publish it so I have no idea if Zeck received any financial compensation. As well I couldn’t think of a single piece of comic work I’d seen from him in at least twenty years, so I don’t know what’s keeping him afloat.

I consulted the price chart again to see if perhaps a sketch was in order: he was asking $50 for a quick headshot and $150 for a detailed headshot so that was all going to be out of my league. In the end I purchased the one book he had available, Raw Fury: The Art Of Michael J. Zeck, for $40 and a signature for $45. He did sign Raw Fury as part of the $40 purchase. 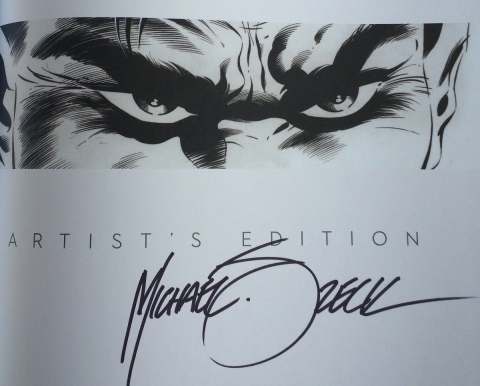 The prices were up front and as such gave me the opportunity to enter into a sales agreement, or not. Either way Zeck would have been the same charming and engaging con guest.

Afterwards we had a wonderful conversation about original artwork and Kraven’s Last Hunt in particular. At the time he was selling pages for about $15 each and sold the entire Kraven’s Last Hunt to one collector, who sat on it for twenty years and then sold it complete to another collector. It changed hands a few times and came to someone who kept the covers and sold the interiors. Zeck mentioned the last complete sale was for $250,000 and there was a hint of regret in his voice. A lingering wonder of what could have been, much like my own thoughts as I wandered away wondering how things could have been if the signature had been free…