This one has been brewing for several months but I needed some research; Pete’s post yesterday spurred me into action.  All around the internet are scans of either full stories or full comics.  I’m not talking about CBR files of last Wednesday’s issues on Torrent sites: that’s a clear case of piracy and is illegal.  I’m talking here about scans of comics from the 1930s up to the 1970s; material that falls under U.S. copyright law. 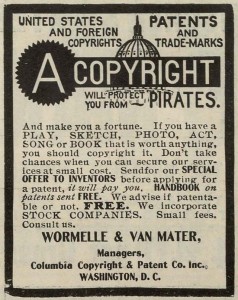 Trolling the internet about copyright law isn’t as exciting as it sounds.  Wikipedia provides many excellent articles but this excerpt from United States Copyright Law sums it up nicely:

All copyrightable works published in the United States before 1923 are in the public domain;[27] works created before 1978 but not published until recently may be protected until 2047.[28] For works that received their copyright before 1978, a renewal had to be filed in the work’s 28th year with the Library of Congress Copyright Office for its term of protection to be extended. The need for renewal was eliminated by the Copyright Renewal Act of 1992, but works that had already entered the public domain by non-renewal did not regain copyright protection. Therefore, works published before 1964 that were not renewed are in the public domain. With rare exception (such as very old works first published after 2002), no additional copyrights will expire (thus entering the public domain) until at least 2019 due to changes in the applicable laws.

Applying this to comics anything published before 1923 and anything published before 1964 without its copyright being renewed are public domain and free to use.  Therefore anything reprinted since 1964 would be copyrighted, in a broad sense of my limited copyright understanding.  What’s interesting is that it’s up to the person using the material to determine if it’s copyrighted and it’s up to the copyright holder to enforce their copyright.  That’s why the recording industry funds the RIAA to enforce their copyrights; it’s labour intensive.

Marvel and DC have been around a long time and have a pretty good copyright record; reprints and collections plus timely renewals.  Dark Horse, Image, Valiant, and everyone else that’s been publishing since the comics boon of the late 1970s are all covered.  It’s the publishers like Dell, Gold Key and hundreds of others that could be public domain or their published material could still be copyrighted.

A site I admire and frequent regularly is The Comics Reporter, a comics blog by Tom Surgeon.  Daily he links to sites that host scans of comic books, like Pappy’s Golden Age Comics Blogzine, The Big Blog Of Kids Comics, Diversions Of A Groovy Kind, The Comic Book Catacombs, Golden Age Comic Book Stories, Four Color Shadows.  These sites mostly offer public domain scans of older comics but I’ve been seeing an upswing in 1970s material that is clearly copyrighted.

I checked links from the last two days on The Comics Reporter and found two items that are copyrighted material: DC Comics The Shadow issue four from 1974 and Supergraphics Comixscene issue four excerpt from 1973.  The Shadow material is without a doubt not public domain and is a clear copyright violation.  The Steranko story from Comixscene is also copyrighted material held by Supergraphics which I believe Steranko owns.

An interesting post was one about a Ditko story from Tales Of Suspense issue 26.  They started off with scans of the original artwork that was sold from Heritage, who keeps their scans online indefinitely.  That gets us into the murky depths of original art and it’s contents of copyrighted characters.  They moved on to include scans of the comics pages thereby moving right into copyright violations.

Most of these blogs feel they’re providing a service, offering up comics that are hard to find.  They try to cover themselves with these kind of statements:

All images are owned and © 2009 by the respective holders and are presented here for educational purposes within the “fair use” terms of US Code: Title 17, Sec. 107.

Note to “The Man”: All images are presumed copyright by the respective copyright holders and are presented here as fair use under applicable laws, man! If you hold the copyright to a work I’ve posted and would like me to remove it, just drop me an e-mail and it’s gone, baby, gone.

I appreciate the effort and since it’s up to the copyright holder to enforce at least the blog tries to comply.  Here’s Title 17 section 107 of the Copyright Act:

Notwithstanding the provisions of sections 106 and 106A, the fair use of a copyrighted work, including such use by reproduction in copies or phonorecords or by any other means specified by that section, for purposes such as criticism, comment, news reporting, teaching (including multiple copies for classroom use), scholarship, or research, is not an infringement of copyright. In determining whether the use made of a work in any particular case is a fair use the factors to be considered shall include—
(1) the purpose and character of the use, including whether such use is of a commercial nature or is for nonprofit educational purposes;
(2) the nature of the copyrighted work;
(3) the amount and substantiality of the portion used in relation to the copyrighted work as a whole; and
(4) the effect of the use upon the potential market for or value of the copyrighted work.

O.K., based on this definition I can mostly go along with site posting scans of comics.  If that’s the case then wouldn’t that cover any site posting scans of material no matter the age, like last month’s Green Lantern, as long as there is criticism or comment?  My problem would then be defining “commercial nature”: if the site is showing ads, posting a donation link and engaging in other money-making ventures then doesn’t the site have a commercial nature?

Food for thought; give your opinions in the comments below.