As anyone who reads this site can attest I love oversized hardcovers.  I want my serving of comic art extra-large if you please.  There is a size in the comic industry that companies are using, about 9×16″.  DC absolute editions, Dark Horse library editions, some Fantagraphics and IDW reprints.  They’re large and fall somewhere between $50-$100 but well worth the price of admission. 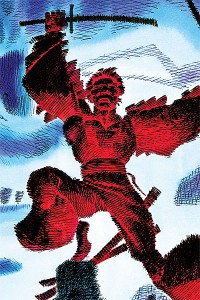 Last week DC released publishing schedules for 2011 up to July and there was a glaring omission: no Absolute editions were solicited.  Is this the end of the line? 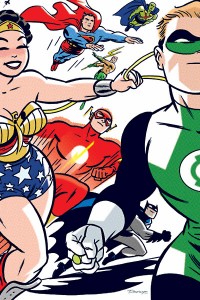 I would have to say there will be more Absolute editions to come from DC, but at what frequency?  I trolled through online sales records and came up with the following: 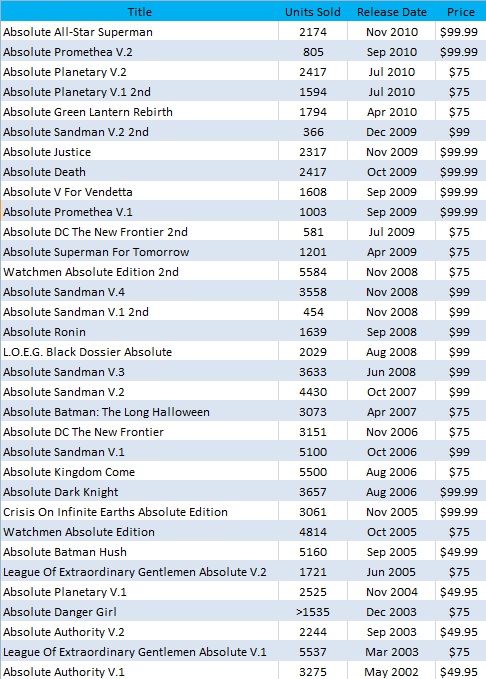 As you can see there are a few trends to consider.  No edition has broken 5000 units sold since 2006; yes Watchmen in its many printings has but that’s slightly outside our focus here since it sells well in every format.  Unfortunately graphics novels weren’t reported until December 2001, and then only the top 25.  March 2002 we had the top 50, February 2004 the top 100 and November 2008 on the top 300.  That’s why I listed Absolute Danger Girl as less than 1535 since that was what #50 sold that month.

Properties known outside the comic store circle such as Sandman and Death do decent numbers but name alone won’t carry a title as evidenced by the two Promethea volumes carrying the moniker Alan Moore.  How exactly did Promethea get a second Absolute edition anyway?

Cover price doesn’t seem to be an issue with people paying for the material, even though Absolute Green Lantern was very thin at 224 pages to be charging $75.  Absolute Planetary V.2 was 384 pages and Absolute Superman: For Tomorrow was 340 for the same $75.  Absolute All-Star Superman was 340 pages for $100: basically we’re seeing a $25 price bump this year.

DC has a wealth of material that fans would snap up immediately, but are sales of 1500 units enough to keep the program afloat?