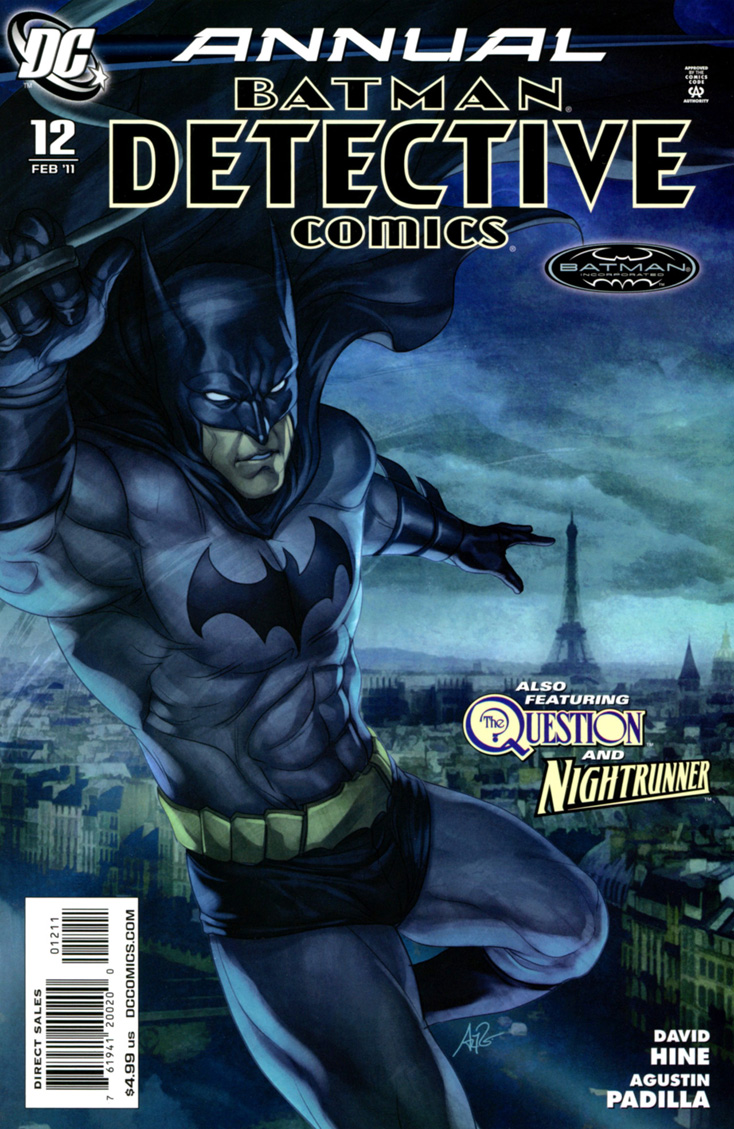 Detective Comics Annual #12 is the latest comic in the Batman Inc. story. Let’s have a look.

With his return to the present, Bruce Wayne has expanded his Batman brand and turned it into a corporation of an international scale. Set in France, the annual focuses on Wayne’s continued attempts to expand his brand of vigilante justice to the rest of the world.

The issue brings us into the middle of Bruce Wayne’s expanding operation of Batman Inc. right into the middle of Paris. Protests, officers in riot gear and assassinations of specific targets are common place. Bruce Wayne and his french counterpart navigate the rooftops, giving chase to a would-be assassin. It becomes fairly clear to the potential assassin that he can’t outrun one, much less two Batmen. The story focuses on Wayne gaining permission from the French government to operate within the state and to apprehend the party responsible for several assassinations.  The issue staggers the revelation of the person’s identity to Bruce Wayne and the french Batman, flashing back over the past week to reveal how each assassination was carried out. When Bruce and his latest protegé finally catch him, they find he’s not the person they’re after in the least, as the real assassin of the group’s final target emerges from the sewer and moves forward to the intended target.

The second part of the story will be continued in Batman Annual #28, released in two weeks.

Padilla’s artwork was solid, but unspectacular and fairly uninspiring.

There were some great early panels featuring some nice work, such as the protest scene where the riot squad attempts to fight back a violent fury of molotov cocktails as the fires engulf the Paris streets. Most of the chase scenes upon the rooftops with Bruce and the french Batman are quite good as they give chase to the perceived assassin. There are also some nice shots of Batman’s silhouette under the moonlit sky. These scenes are nicely coloured by Avina and stand out among the rest of the book’s artwork.

The remaining art does little to meet the rest of the book’s standard, falling well short of the detail and aspiration of the earlier work. Where the earlier work tried some different techniques, it feels like the latter pages fall into a formulaic set-up save for the odd occurrence. These mostly boring pages include some conservative one through nine panel layouts, while most other pages adopt a five-point panel layout in varying delineations that mostly sleepwalk their way to the issue’s end.

The issue does little to differentiate itself from the other Batman Inc. tie-ins, sticking to the “Bruce Wayne globetrots” plot device. This issue brings Bruce Wayne to Paris where he tries to secure permission to operate within state borders from the french government, but the story itself is rather unappealing and formulaic. It makes strides towards putting Bruce Wayne’s detective skills and growing international influence on display, but doesn’t really engage the reader in how it presents the story.

The issue also featured back-up stories focused on Nightrunner and The Question. Both were good additions to the Annual and help justify the hefty price tag. The stories felt more well-developed and paced than the main story, which at times was all over the place. The backup pieces certainly added another layer to the story.

I feel like the main story wasn’t very strong, glancing over what could have been a better story had more time been devoted to telling the mystery of the entire event holistically. Instead, the book jumps around between current events and flashback sequences over the last week to flesh out the story in what was a well laid out but altogether lazily told story that failed to gain my interest or stand out among the droves of Batman Inc. tie-ins. Despite this only being the first part of the story, I’m not convinced Hine will be able to recover from this clumsy start to conclude part two of the story when the Batman Annual hits stands in two weeks. Give the book a look, but do so with caution.