My son and I attended the Forest City Comicon and afterwards wandered over to Heroes Comics. We spent a good amount of time in their discounted second floor, perusing and meandering around the shelves and boxes of comics. We have the same routine every year, and like those other times we didn’t buy anything at Forest City Comicon but went home with a big bag from Heroes. 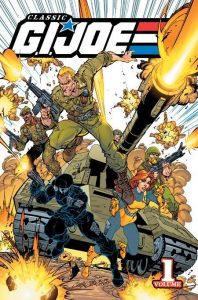 While I was searching through old newspaper strip books (Heroes purchased a large amount of books from the Beguiling when they moved early this year) my son was going through the $3.99 trade paperback shelf for G.I. Joe comics. He had brought along his savings and was careful to spend it. While discussing his choices with me as we gathered up books and added up totals he kept telling me he already had that “adventure”. Focusing a little more on what he was talking about I realized he was referring to individual issues in the trades as “adventures”.

I hadn’t encouraged any type of genre or comic for my son to read: I let him go through the shelves of the various comic stores we visit and pick things out. We then go through them and discuss what isn’t appropriate for his age and then see about our budgets, since invariably as a parent you’re kicking in. So far he’s gravitated to classic G.I. Joe comics, which is what started me reading comics in 1980. I did give him the first seven Usagi Yojimbo trade paperbacks for his birthday and those were an instant hit.

On the way home as he quietly read through his new purchases I had time to ponder when I stopped thinking of comics as adventures and just thought of them as issues. It was probably when collecting comics became as important as reading comics, and that’s a shame. When you’re driven to have them all, each comic becomes another checkmark on your list and not an adventure to be savored.

The current direct comics market, like many things in our first world society, is geared to getting more: more of everything, as soon as possible and for as long as possible. I remember my grandfather telling me two things: you don’t need anything but food, shelter and clothes on your back, don’t want everything you see and don’t buy everything you want. Hard lessons from someone who had grown up between the world wars.

We get the new Previews catalogue, either in print at our local comic shop or digitally from Previewsworld.com, pick out everything we want that’s coming out, check them off our list as we buy them and then repeat the cycle. I buy more books than I have time to read, but I’m afraid of missing out on it. To further compound the cycle I review material, and reviews need to be timely i.e. close to release date, and as such you read through something twice to get what you need for the review.

This leads me to ask: at what point am I reading to enjoy the adventure? My son has a limited stack of comics; about thirty trade paperbacks and twice as many individual adventures. He reads everything at least three times. He gets comics from the library, repeatedly, to enjoy them again and again. I realize I’m comparing a preteen’s life of leisure to an adults, but it speaks volumes about what we’re doing with our reading time. I seem to be wasting more and more of it on social media, and I sit and scroll through useless posts on my mobile device while he sits and enjoys another adventure. Which of us is getting it wrong?