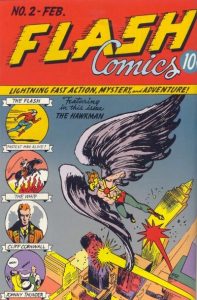 I’ve had this book on my list for as long as I can remember. It fits in with my belief that 2nd appearances are often, but not always, undervalued.  So when fellow CBD writer Mike Huddleston posted his brave Overvalued Spotlight last week I knew it was time to dust off this old pick. Truth be told Mike and I discussed the two posts and tried to co-ordinate them, five days apart is close enough.

To steal a bit from Mike’s post we see that Flash Comics #2 is actually worth less in the Guide that Mike’s Flash #105 which isn’t surprising given the hobby’s tendency to put value on 1st issues like X-Men #94, Captain America #100 etc. The hobby also loves #1 issues which is probably why the inferior All Flash #1 is valued more in the Guide. The one that makes no sense is Showcase #8, here we have the 2nd appearance of the relaunch worth more than the 2nd appearance of the original.

I’m often scolded for putting impossible books up on the Spotlight but although there are only 21 CGC graded as of this post this book trades actively. There have been 4 sales in the last 20 months. recent sales include a CGC 4.5 in August and a CGC 2.5 also in August. The books sold for 13% over Guide and 37% over Guide respectively. Also of note is a CGC 7.0 that sold early last year for 10% above current Guide.

I say the market will get it right and start putting more value on books like Flash Comics #2.