Warning: If you have not seen The Avengers there will be spoilers galore.

Huge amounts of them in fact.

I’m pretty much going to describe a lot of stuff in it.

Along with the credits sequence.

If you’re still here, it’s your own fault.

Okay after this picture, spoilers galore.

The Avengers was pretty much the perfect culmination of all of Marvel’s film plans since the first Iron Man. Marvel and Paramount really couldn’t have asked for a better end to their current film cycle.

Mark Ruffalo and the Hulk were a bit of a surprise. I think Ruffalo and director/writer Joss Whedon managed to take what everyone loves about the Hulk and finally put it on screen. It’s very much like the current animated Hulk (as seen on The Avengers cartoon) but with a more adult feel to it.

In terms of direction, the biggest success was the huge action sequence at the end. Large groups of characters are hard to balance on any film but in a huge fight sequence of this magnitude, that balance is even harder. Not only did Whedon figure out how to do this but he figured out how to do this in the style of the comics we love. Watching this sequence was an absolute joy for me.

The question is, where do they go from here?

A film with an opening weekend like The Avengers had is a very tough act to follow.  #1 at the box office is one thing but 200 MILLION dollars for an opening weekend is another. I’m going to bet that they have another strong weekend this upcoming weekend due to word of mouth and lack of competition (sorry Dark Shadows, you’re DOA). Marvel has a string of movies planned to possibly lead to Avengers 2 (which is already shuffling into pre-production) but now the expectations are pretty high, especially given the appearance of Thanos in the credits sequence. So what’s next?

Iron Man 3 is first of the gate and I imagine it won’t have a lot to do with Avengers 2. Everything that’s coming out about it from casting to rumors seems to head the film into an adaptation of Extremis story arc. Assuming this is where the film is headed, it’s a solid idea and makes for a good breaking off point of sorts. The Avengers don’t have to be in it, the story itself will be a little different than previous Iron Man films but not so different that viewers won’t get it.

At the current moment it looks like it’s a toss-up between Captain America 2 and Thor 2. Thor was planned to be finished first but as it stands it’s currently looking for a director and probably another take on the script so it might not make it’s planned release date. After the sequel to Cap, presumably we’ll get the long gestating Ant-Man film from Edgar Wright and then Avengers 2.

So where does Thanos fit in? There’s two answers to that. 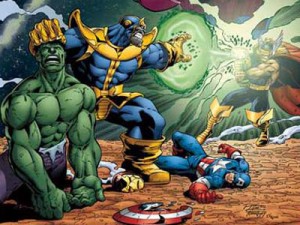 In my mind as the comic nerd that I am, I wouldn’t make Thanos the villain for The Avengers 2. Thanos has never really been an Avengers bad guy.  When you sit back and think about it, Ultron, Kang the Conqueror, Korvac, they all come to mind before Thanos does. But Thanos is a galactic villain and would fit in perfectly with the Thor universe (Andrew at Geek Hard mentioned the idea to me of Loki being the tool for Thanos to break into Asgard to grab The Infinity Gauntlet). 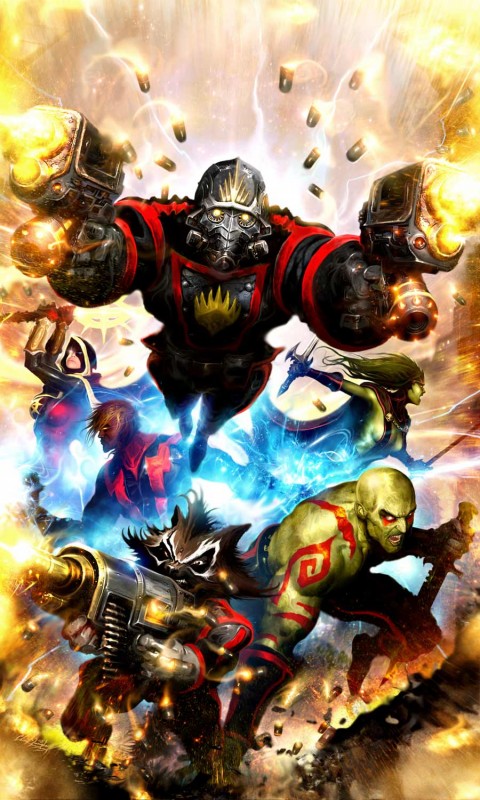 We know Marvel has a number of projects lined up in various stages of development. The Punisher and Hulk tv shows, Cloak and Dagger get thrown around a bit, Dr. Strange and we are also aware that Marvel does have one or two film projects that are slated but haven’t been officially announced. Could the Thanos piece really be setting the stage for a lesser known Marvel property? Like Guardians of the Galaxy perhaps?

Marvel head movie guy, Kevin Feige, has mentioned the current Guardians of the Galaxy in a few interviews as a possible film; maybe it’s further along then we think. Here’s what I could see happening.

Marvel lays off the Thanos storyline until Thor 2.  Maybe it’s not the entire story but Thanos manages to get the Infinity Gauntlet and returns to space. Collecting his army he begins to take over the galaxy until he runs into The Guardians of the Galaxy.  Make that film kind of like The Dirty Dozen in space. They almost stop Thanos until he heads to Earth for The Avengers 2.

You piece it together this way you get two strong things out of it. The Guardians of the Galaxy will do better box office if the public is aware of the connection to The Avengers sequel. Make sure to point it out in the press that it’s a direct tie-in. It won’t do Avengers numbers but it will do a lot better with that tie-in then it would on its own. Now you have another franchise you can build off of later. The second thing this scenario does is make Thanos a credible threat for the audience. Yes, we all loved that two second shot of the purple bad guy but in reality, most folks don’t know who he is or why the Avengers should fear him. You lay that groundwork in Guardians of the Galaxy, you have more screen time to play with for the Avengers. The only draw back is that it’s still kind of an alien invasion storyline which we’ve seen but you can do a couple of different things with it, maybe Thanos isn’t after the planet, he just wants to kill everyone due to his worshiping of death.

Marvel has to look at developing a few different non-Avengers related films as well. The Runaways is a perfect example of a property that would be within Marvel’s wheelhouse but completely different than what we’ve already seen. Dr. Strange too although I imagine it’s a tough sell.

But as of yet, Marvel hasn’t hired me for their film think tank so the results might be a little different then mine.