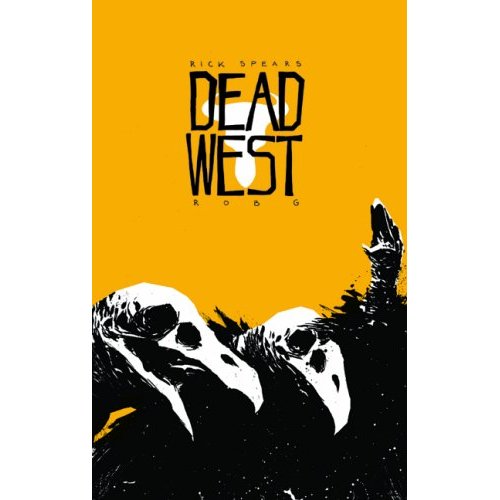 Dead West is one of those rare graphic novels that blends two distinctly different genres and makes them work in ways previously thought impossible. Another great story by Rick Spears and Rob G. (who also created the subversive and romantic graphic novel, Teenagers From Mars), Dead West takes conventional American History 101 and turns it upside-down and inside-out without apologies.

The story starts typically enough: Native Americans welcome the white man to their lands, only to have the white man overtake the land and kill everyone except the tribal chief’s son, who escapes. Then things start to get creepy: a new town, (ironically named Lazarus) is built several years later, only to have a horrific curse put upon it by the very boy who escaped the raids. This curse allows those buried in the Lazarus cemetary to resurface and feast on the villagers, who transform into undead beings as well. During this ghoulish setting, a rugged, mysterious man enters the town and finds himself ensnared in a battle he never expected. The scratchboard pen and ink style coupled with minimal dialogue keep Dead West dramatic, gruesome and visually entertaining for us fans of spaghetti westerns, with a healthy dose of zombie lore thrown into the mix. It’s George Romero meets Sergio Leone, Clint Eastwood against undead minions. And really, who wouldn’t want to check out a piece of that?

Mythos, Melee, Mayhem & Musings | An Oldie But a Goodie: Wolverine: The Brotherhood series