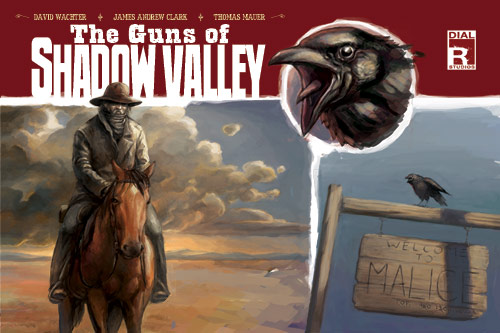 Ok, I’ll admit it: I kinda-sorta-really-really want to be a cowgirl. With amazingly sexy Western-themed entertainment like Red Dead Redemption and Jonah Hex exploding all over the entertainment scene recently, who doesn’t crave the thrill of an adventure circa Deadwood, 1876? The comic world is no exception. So holster your gun, pardner, sit for a spell, and take to reading about one of my favourite comics that captures the spirit and brazen adventures of the Old West like few others can, with a supernatural twist that makes it the gift that keeps on giving.

The Guns of Shadow Valley: Creators and writers David Wachter and James Andrew Clark (who also created the series Scar Tissue) have given fans of this genre a distinctly beautiful, richly illustrated, and well-written experience to enjoy. And enjoy it you will. The Guns of Shadow Valley is a fledging online comic that tells the story of a secret harbored deep in the mysterious Shadow Valley that could forever change the face of the frontier. The website expands on the plot by adding, “To protect that secret, a posse of gunmen with special abilities must come together and defend against a tribe of ghostly warriors, an advancing army led by a deranged Colonel, and the perils of the valley itself.” It’s Sergio Leone crossbred with X-Men, a dash of steampunk, and a whole lot of nothing is ever what it seems. Did I also mention that the story takes place during the 1870s in the Oklahoma Territories? There’s nothing about that description that I do not like. Despite the fact that Guns will turn only one year old on July 21, 2010, Wachter has spent that year building strong, believable characters and an environment so austere, so authentically Western, you can almost see the tumbleweeds and smell the gunsmoke. The only thing I find disappointing about this entire series is that no major comic book company has offered to give it a home. However, new pages go online every Tuesday, so hooray Internet!

You can also visit Mr. Wachter’s Twitter and Mr. Clark’s twitter and thank him personally for creating a story that, once again, makes me believe I was born in the wrong century.

Mythos, Melee, Mayhem & Musings | An Oldie But a Goodie: Wolverine: The Brotherhood series