In 1986, at the height of the 80’s comic boom, DC comics published Watchmen and Batman: The Dark Knight Returns (DKR). If you were to ask any comic fan which books are considered to be the “best” the medium has to offer, these two titles would top most lists, even today. Terms like “best” or “great” are blanket expressions of course. They are meant to communicate affection but in reality are kind of meaningless. There are so many genres, tastes and interests that any meaningful response should be more specific. As well, comics have such a long history…, to continually reference the same books over and over and over again, I feel does a disservice to all the other “great” stories out there. But, I do find it very curious how amongst all the great stories, amongst all the many fickle tastes… how is it that these two stories are universally appreciated? 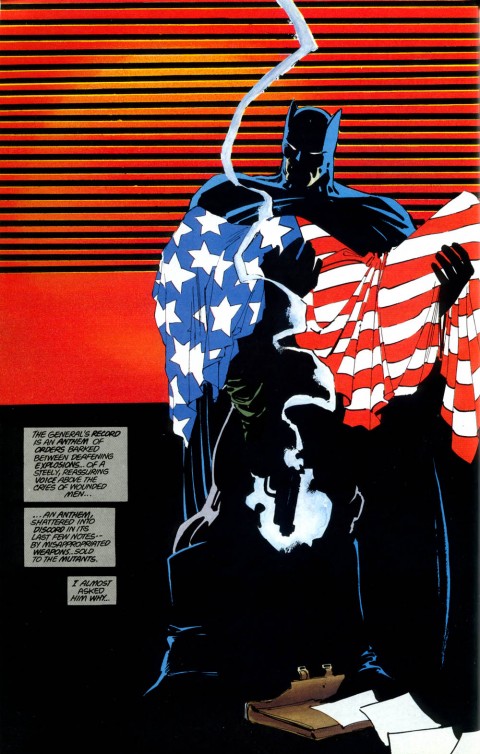 Some popular ideas about what makes Watchmen and DKR so great include pent-up demand from an aging demographic and shifting tastes toward darker stories. In other words, like most successes, they were the right books to come along at the right time. It’s an academic rational, reasoned in hindsight, which I tend to agree with. At the very least, it does seem to explain why these two books are commonly admired and considered to be game changers. However, this says nothing about the artistry or the insight offered by these stories. Watchmen in particular was especially poetic for me. In book 9, page 27, Dr. Manhattan explains why we as a species are special and worth saving. Against impossible odds each of us exists as a result of a “thermo-dynamic miracle”. Alan Moore applies reason to what is essentially random chaos and the realization that this duality can coexist is a thought-provoking premise. 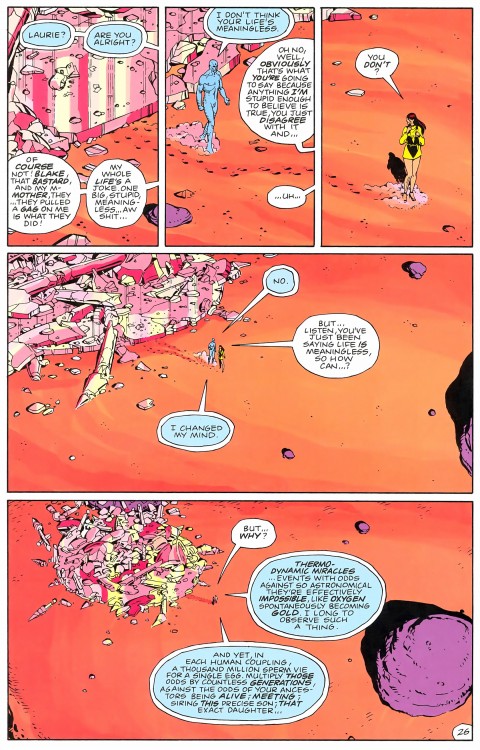 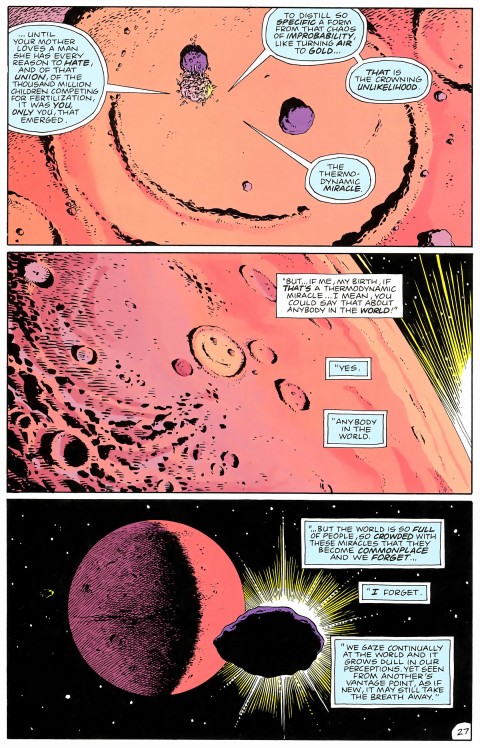 A few years earlier, in 1983, DC comics published a prestige format comic titled Ronin. It appeared on the stands without much fanfare and was ultimately received with moderate interest. In this period of comics history, Marvel and DC both had expectations in terms of how comics should be drawn. Ronin was one of the first, if not the first, modern book to break away from this established standard. I use the word “established” because there were other books you can cite as being individualistic but these were older books which reflected the sensibility of the times when there was no formal “house style” in place or indy titles which are personal by nature.

Fresh off the success of his Daredevil run, Frank Miller was faced with opportunities. DKR could not have happened without Ronin (which I suppose is obvious) and I believe that Ronin set the wheels in motion for the formation of Vertigo 10 years later. I couldn’t find any concrete evidence of this in my research so yes, this is anecdotal, having lived and collected through these years. However, there isn’t a lot written about this subject so the lack of interest doesn’t discredit this notion. DC already had more mature titles with characters like the Swamp Thing, Hellblazer and Black Orchid but they were all part of the DC Universe. I’m also well aware that throughout history, creatives have always wanted more ownership. So you can definitely point to other books such Camelot 3000 which predated Ronin by a few years, or the early Epic line of books as being a precursor to Ronin. Like a forest, ideas and creativity grows upon itself so I would not argue these points. However, these books still looked and felt very establishment. Where these books took a step forward, Ronin leapt. I’m not suggesting that Ronin began the “independent” movement but rather the “creator owned” concept was beginning to solidify and was becoming more expressive, and Ronin set the template for what would remain to this day. Although Watchmen and DKR receives most of the credit, Ronin was an early signal of the things to come. With Ronin, we have the beginning of the Dark Age. 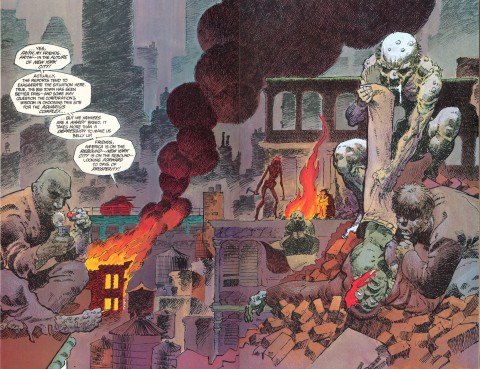 Whether you agree with my thesis or not, however, none of this is what makes this title so great. In part two, let’s examine the art and story.