On Saturday I attended Con Bravo.  It is a show I haven’t been to before, so I wasn’t sure what to expect.  Con Bravo is the “Festival Celebrating Everything Geek” and the focus of the show is “indie media, gaming, and cosplay”.  Unfortunately I do not follow the indie scene, so I was at a loss when it came to the special guests and panels that were featured at the show.  But the convention goers were going nuts for the guests.  There were long lines waiting to interact with the celebrities.  Which is the real focus when it comes to the celebrities at Con Bravo – the personal interaction with the convention goers. 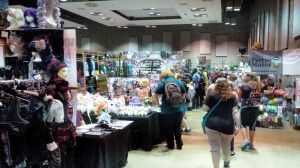 Some of the other fun events at Con Bravo are video game tournaments, concerts, live-action roll play, costume contests and of course the dealers room.  The dealers room showcased a wide array of goods for sale.  It ranged from hand crafted items like soap and art, to back issue comics, to vintage video games.  I spoke to a few vendors, and they said that sales were good and specialty items were very popular. 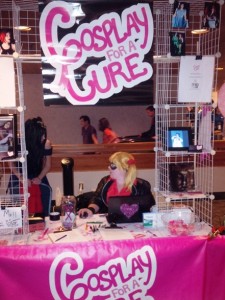 Cosplay For A Cure has made many updates over the past 2 years to their booth.  They have a new back drop, and at Con Bravo they had professional lighting which turned the photo shoot into a lot of fun with some great quality pictures.  Cosplay For A Cure was also raffling off a pink Darth Vader Blockhead, which was donated by Dr. Stevil.  All of the proceeds go to Breast Cancer Research.  Follow them on Facebook for details on their next show. 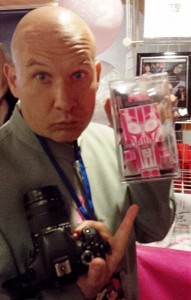 As I said earlier Cosplay was everywhere at the show.  There were more costumes there in comparison to other conventions.  It was fun to see the wide array of costumes… even though I didn’t know who half of the people were supposed to be.

A lot of the costumes were from video games like Final Fantasy.  Since I’ve never played the game, I had no idea who anyone was.  I was dressed as Thor so I was instantly recognizable.  I did see some X-Men, Spider-Man, Punisher, Deadpool and a whole bunch of Lokis (or is that Lokii?)

Stephanie and I did a photo shoot with Cosplay For A Cure, and also did a photo shoot with AS Photography (aka Cosplayers Canada).  You can find Andreas at different shows and his cosplay photos are well-known.  Being a new experience for me, he made it very easy to work with him and I am very happy with his work.  He also produces a magazine for each of these shows.  It’s a nice collectible to have, and it’s available for order from his website.

I was one of the only Thor’s at the show.  And it was the wrong week to be doing a cosplay of Thor.  I couldn’t count how many times I was stopped and reminded that “Thor is a Disney Princess now” or “What’s it like being a female character?”

It started to be exhausting at times.  Some people were having fun, and it didn’t bother me too much.  But there were some people who were being… jerks about it.  They would make the Disney Princess crack, but by that time I had enough.  I would try to engage in a conversation about the change in character, but they just wanted to be funny… and knew nothing about the character.  It would have been nice if they knew what they were talking about… instead of just being a jokester.

Con Bravo is definitely unique when it comes to the Southern Ontario convention scene.  It is geared to a genre that I am unfamiliar with, and I was pleasantly surprised with how much fun I had at the show.  If I was able to attend another day of the show, I would have been able to attend some of the panels and visit with guests.  But all in all I got a good scope of the show and will most likely return next year.