I’m quite thrilled that Kurtis J. Wiebe has found success with PETER PANZERFAUST, his re-imagining of the Peter Pan story set during World War II. A television adaptation has been put in motion and several of the single issues are currently coveted among collectors and speculators. And it’s an excellent book. But in the end, it’s still a retelling of Peter Pan, and I hope the title’s success leads people toward Wiebe’s other, more original work, including DEBRIS, which is being released in a collection from Image on Feb. 19.

The trade paperback collects issues #1-4, likely the entirety of the series. DEBRIS first caught my attention because it reunited Wiebe with artist Riley Rossmo. I was quite impressed with their work on the cult favorite GREEN WAKE, and was equally dismayed when the title was cancelled and the final issue had to wrap things up rather hurriedly. Wiebe went on to make PANZERFAUST and GRIM LEAPER, while Rossmo went on to illustrate REBEL BLOOD and WILD CHILDREN. All were enjoyable, but there was still a GREEN WAKE-shaped hole on the shelves each month, and I hoped the pair’s DEBRIS might help fill it.

DEBRIS is the story of the last remnants of humanity fighting to stay alive in a vast wasteland prowled by creatures assembled from spare parts and seemingly held together by some sort of shamanistic spirit beings. A small village called Maiden is guarded from the beasts by Maya, a Protector. When the only source of fresh water in the town is destroyed, Maya must set out to search for a legendary city said to be the last source of “living water” in the world.

Wiebe’s dialog has a natural flow. His characters rarely speak in the clumsy declarations so often found in comics, and there’s a dry wit and intelligence to his writing that always makes me wonder how he hasn’t yet been poached by one of the big two. He writes Maya as a young and ambitious warrior, somewhat of an outcast even in her own group. Her mentor, Calista, trained her from a young age, and Maya knows only the mission. Her interactions with fellow village members are stiff and antagonistic at times, and it’s only when she’s out in the “Debris” and meeting outcasts like herself that she seems comfortable. 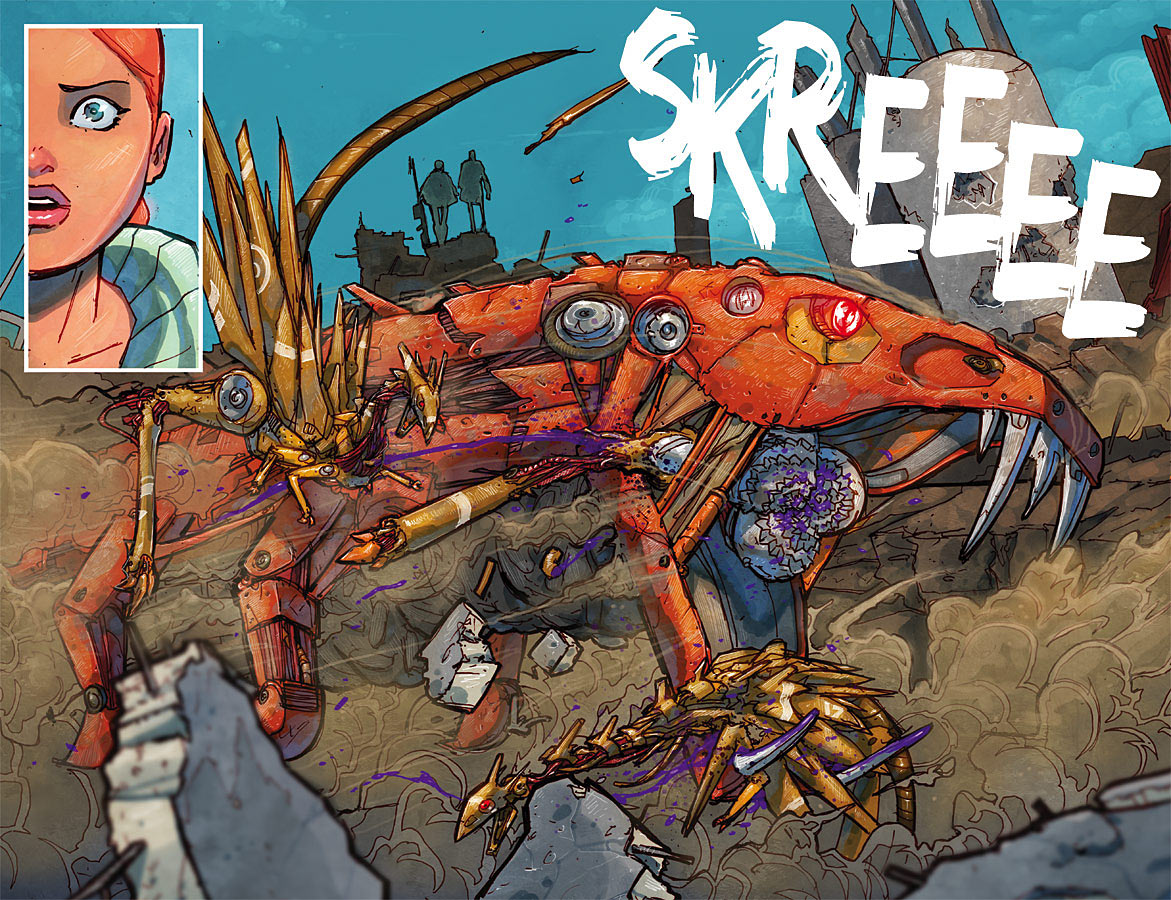 Rossmo’s artwork is distinct. He has a knack for drawing mean and nasty creatures and for expressive faces that stop just short of being overly cartoony. His figurework is top notch and his inky, scratchy style is a good fit for the many horror titles he’s illustrated, most of which are colored with dark or muted palettes. With DEBRIS, however, Rossmo’s art takes on a new brightness that is both recognizable as being from his pen and a departure from the dark style he’s become known for. Much of this probably has to do with colorist Owen Gieni’s bright, Easter-basket palette. Gieni’s sun-bleached colors look great on the printed page (and probably look even better on a backlit tablet), but they don’t diminish the frightful robotic monstrosities that Rossmo has constructed.

Rossmo provided art for issues #1-3 and was credited with “breakdowns” for issue #4, with Gieni finishing the pages. The final chapter looks a lot like pages from the first three issues but without Rossmo’s charactaristic hard inked lines. It’s a curious shift that I’m guessing had to do with the book’s short life span.

The book is a fascinating yet small look at a post apocalyptic world with deep connections to the earth and the spirit world. There’s plenty of action, and a few twists and turns that I wasn’t expecting. It’s also one of the most colorful books I’ve read in ages.

Alas, the final chapter, much like Rossmo and Wiebe’s previous comic GREEN WAKE, felt rushed. The final pages make a huge logical leap that left me scratching my head and only sort of understanding what happened. There’s a rather ho-hum epilogue that I would have gladly traded for a few more pages of actual exposition to help bring Maya’s story some closure, but all in all the book succeeds in telling a wonderful little sci-fi tale. I still miss GREEN WAKE, but I’ll take an occasional collaboration like DEBRIS from these two talents when I can.