Everyone eats. There are a few activities that are universally shared by humans, and eating is both physically essential and loaded with cultural implications. Everyone also has opinions about food. Some of us take the act of eating very seriously and consider the ethical implications of each bite. Others simply eat whatever seems tasty. DIGESTATE offers comics about eating — autobiographical, imagined and persuasive — from across the spectrum of eating thought.

DIGESTATE features a heaping portion of nearly 300 pages of comics from more than 50 artists. There are a few stories that are long enough to qualify as mains, but for the most part the book is made up of starters, creating more of a tapas-style meal than a traditional 5-course.

Some of selections are delicious, from-scratch creations that are sweet and extol the virtues of delicious food. Others are more bitter or sour, with an overly preachy flavor. But grouped together they offer a rich balance that really makes the reader sit back and think about all of the things he stuffs in his gaping maw. 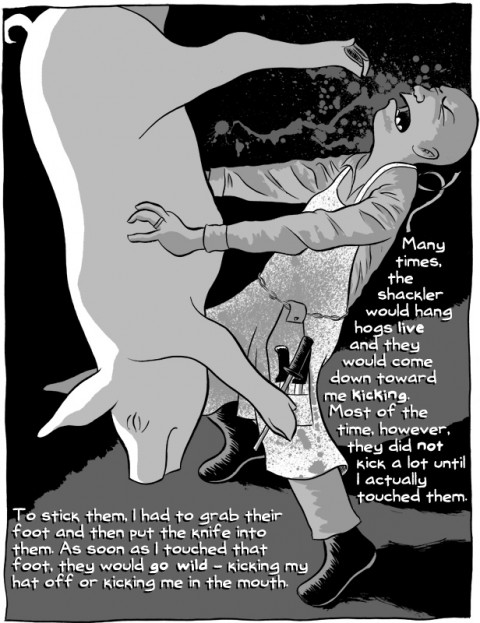 Some dishes are actually rather unappetizing, but it almost made the sweet, chewy courses that much better. I considered them palette cleansers.

Some pages seem ripped straight from a hastily-filled sketchbook, while others seem pencilled, inked and lettered with utmost care. I found the messier, sketchier pages to be slightly unappetizing, but remember, presentation is important in the world of food comics. 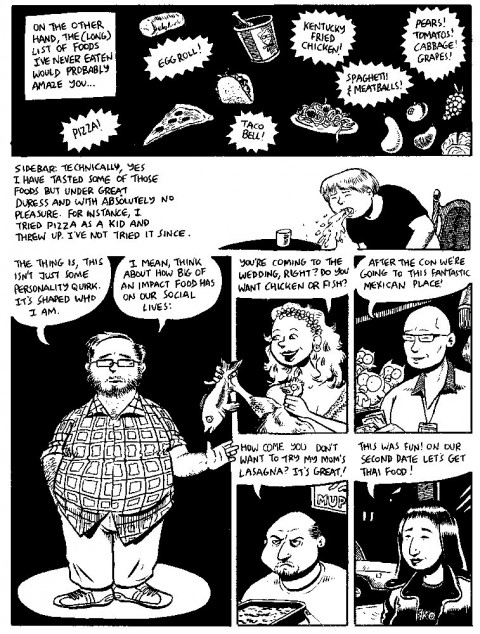 I tended to enjoy the pages that talked about food experiences and stories surrounding the culture of eating more than the essays and declarations about food philosophies. But the anti-meat manifestos definitely sparked more critical thinking in my own brain, and reading about how these comics artists justify their own food habits made me want to declare my own thoughts about food. And so:

I am an omnivore. Humans have been omnivores for thousands of generations, and it has served our species pretty well. With one exception*, everything that humans eat was once alive or produced by something alive. Vegetarians choose to be so for a variety of good reasons. But plants are feisty living things, and to assume they are a life form that is less deserving of our respect is naïve. That being said, production of meat is ugly and wasteful in America, and to choose not to eat meat because of the practices of that industry is worthy of respect. But consider that our population will likely keep growing, and the food-production industry along with it. Vegetarians and vegans will always be a minority of the population, and their abstention will not effect change in the meat industry. Only conscientious omnivores who use their wallets to reward better practices will. Unfortunately, the majority of omnivores don’t think even this much about what they eat or where it comes from. Even if they do, poverty will often demand that they spend their money on what is cheapest, not on what is most ethically produced. I honestly don’t know how this will ever change without massive government intervention, which is unlikely since large industries have so much political power in this country. And meanwhile the population is ever growing…

Honestly, these opinions have always percolated in my brain, but I hadn’t spent a lot of time thinking about them before reading DIGESTATE. I’m sure there are better books out there for discussions of food ethics, but if you’re looking for an entertaining comic book about food and eating, I don’t know of a better one than DIGESTATE.

*The exception is salt. 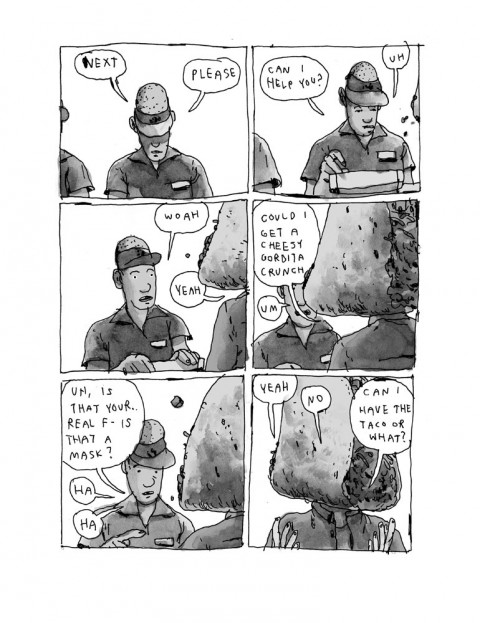