“Kirby Mosters”, mention that to any seasoned comic book collector and they will immediately get it. “Ah yes, the old Atlas stuff, great f‘n covers eh!” Indeed.

Marvel Comics as we know it is best summed up as starting  November 1961 with the release of Fantastic Four #1. Before that All those Marvel legends were creating under the Atlas imprint. Titles we all know and love like Tales of Suspense, Tales to Astonish, Journey into Mystery and Strange Tales all started out as Atlas titles.

Jack Kirby was prolific during the Atlas years churning out some of his best covers, if you ask me, during this time. The “Kirby Monsters” of course alludes to all those great monster covers Kirby did in the late 1950’s and early 1960s. Kirby moster covers have always been tough to find, there is big demand and little supply so scoring any should be considered a coup. 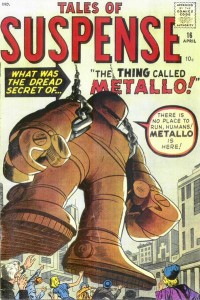 We all know covers weigh heavily on collectability and this week’s Undervalued Spotlight pick was always highly collectible for its dramatic cover.

I’ve been on a Cosmic Marvel kick lately and it is for good reason. Cosmic Marvel is a very large mine from which we are extracting gold, slowly but surely old forgotten issues are coming to light that are proving to be important and significant in this brave new world that Disney/Marvel is creating.

The funny thing is most of these books were not intended to be any such thing at the time. Modern writers are recasting some of these old characters into prominent roles today.

Our cover monster Groot has slowly and quietly weaved his way into the current Cosmic Marvel Universe, so much so that he is now a member of the Guardians of the Galaxy and he is set to be voiced by non other than Vin Diesel in next year’s Guardians film.

It was the Vin Diesel news that got the wheels on Groot turning and as I dug through the history I realised all this was kind of easy to miss and this same thing has probably happened, is happening and will happen to many other obscure characters from the past. Technically speaking we should have spotted this book a lot earlier.

Groot is the tree like alien who in Tales to Astonish #13 invaded Earth in hopes of capturing humans and experimenting on them. Fittingly Groot is defeated by an army of termites (borrowing off the War of the Worlds premise here Stan).

The Groot character actually surfaces again in Hulk Annual #5 (1976), this book deserves an Undervalued Spotlight of its own if you ask me. Hulk Annual #5 brings back many of the Atlas mosters including Groot, Blip, Taboo and my favorite, Goom! Hulk of course beats up on them all. You can still find this comic in the half off bins or the $2 bins, pick as many up as you can!

In the mid 2000’s Groot was re-imaged as a good guy of great intelligence and pedigree and he began playing a pretty big part in the happenings of the Cosmic Marvel Universe. He figured in War of Kings, Annihilation: Conquest and the Thanos Imperative just to name a few events and come on, he hangs with Rocket Racoon.

He’s hard to kill, this Groot is. All he needs to survive off of him is a little twig or something and that eventually grows back into Groot. Cool. He’s like the Aquaman of the forest in his ability to control trees and have them do his bidding. He’s an Eco Friendly hero!!

I Challenged… Groot! Is the 7 page lead story in Tales to Astonish #13 and its creative team leaves you drooling, written by Stan Lee, pencilled by Jack Kirby, inked by Steve Ditko and colored by Stan Goldberg.

As the guy on the infomercial says – ‘but wait, there’s more’. This issue also delivers the 6 page story titled I Found the Abomitable Snowman! Pencilled by Jack Kirby and inked by Steve Ditko.

They should call this the comic the Woody issue with all due respect to Rifleman #10. “My Friend is not Human” is a 5 page story pencilled and inked by Steve Ditko and its all about a guy wanting to turn into a tree!

Don’t abandon hope; I think this book can be found in some old bins still. Yeah the seller will have a premium because it’s a Kirby Monster book but at least it will not be crazy CGC auction prices. Anything below double guide for this comic is a bagain!