Nothing has been written about more in comics fandom than the split between Jack Kirby and Marvel. Jack leaving for DC. Jack returning to Marvel and all the various arguments that go along with it. My little bi-monthly column can’t begin to get into all the permutations of this topic nor do I want to. I am just glad we had the mind of Jack Kirby to entertain and enlighten us for so many decades! 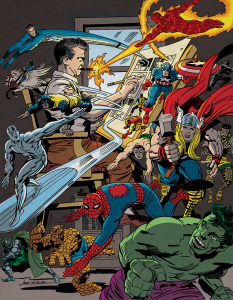 Jack has been gone now for 22 years or so. He died on February 6 1994, yet has his work ever been more alive than it is today? You can’t turn around without seeing his characters everywhere! The Marvel Cinematic Universe, simply put, sprang from Jack Kirby’s pencil on the old school drawing table he used in the basement of his home! Whether it’s on the big screen or the small screen he is everywhere!

Even with all the tinkering at Marvel that has been going on over the last few years, Kirby’s characters are everywhere.

And let’s not ignore DC. Even though the DC Cinematic Universe seems to be running on less than round wheels, Kirby is essentially the overarching architect there as well. The Parademons making an appearance in Superman v. Batman foreshadow the appearance of Darkseid and hopefully the New Gods somewhere down the cinematic line. Now I am just speculating here regarding this but it would make sense.

So what is my point you ask? Thank heavens for comic books! Our “little” hobby has sprung forth and conquered the world! Literally billions upon billions of dollars have been generated  not only affording us some great entertainment (Marvel) and hopefully more cohesive new works (DC) yet to come. How many well paying and creative jobs have been created by our four color classics?

In my wildest dreams I never saw all this coming, but with the advent of modern technology, you can believe a man can fly! Hey, I think that has been used before.

So raise a toast to Jack Kirby, as what would have been his 99th birthday on August 28th! He certainly didn’t create all of this by himself but without him, I am sure we wouldn’t have what we have now!