The tires groaned, tearing themselves from the pavement. The sky calling, but the weight, heavy, too heavy, to lift this bird off the ground. The wings strained for the sky, as the engines were screaming for a release that would only come when all wheels had left the cold, grey, ground.

Those were the thoughts running through my mind as I began formulating my thoughts for this column. I am heading to Europe, Belgium to be precise, to visit my brother and a few more family members. I tried to read the two mini-series of Nathaniel Dusk, from 1984 and 1985, before leaving but was unable to complete them all. I had however read enough to write this.

The thought came to me to write about this great series after Peter Chin posited the question of what DC series would be good to pursue for an upcoming movie?

In 1984 Don McGregor, of Killraven, Black Panther and Ragamuffins fame, went to then DC editor Dick Giordano and pitched the idea of a 1930’s private investigator. No long underwear types, no capes and…no inks.This period piece was to be drawn by industry legend, Gene Colan, and shot directly from his magnificent pencils and then to be coloured! Technology had finally caught up to Gene’s skill with a pencil. 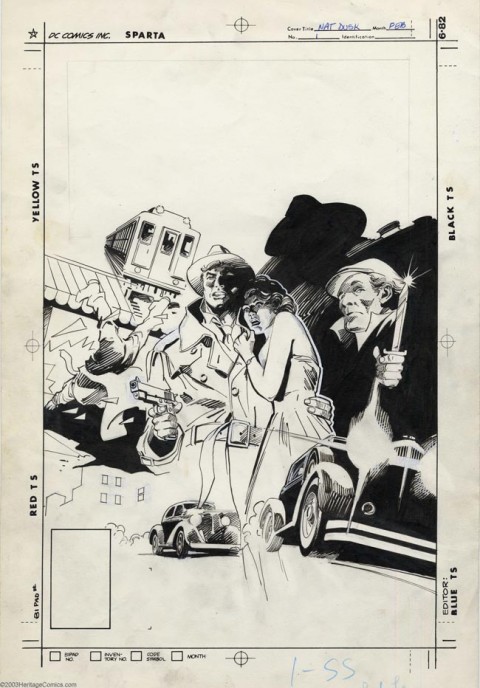 Or so they thought. The first four issue mini-series was a great story but the artwork definitely suffered.A noble experiment that would pave the way for the next fantastic, reproduced from pencils, double sized Nathaniel Dusk series, Nathaniel Dusk II “Apple Peddlers Die at Noon”. If you like hard boiled detective yarns this one is exceptional.If you have never tried any such stories this is a great place to start.

Where the first series suffered from underwhelming reproduction, the 2nd, virtually lept off of the page with a never before seen quality that was breathtaking! The movement, the camera angles and the emotion and nuance in Genes’ characters were amazing, and arguably, some of the most beautiful work ever done by Gene Colan on any series. The coloring on this job was also excellent, and unlike the first series, really worked well with the reproduced pencils.

If you haven’t heard of Nathaniel Dusk, scour your local comic shop for these back issues. Nathaniel Dusk II is definitely a better quality reproduction however both are definitely recommended and are easily found either on eBay, Amazon or your local comic shops back issue department and probably one of the best buys you’ll ever make for a real hidden gem of both story and artwork!

No one who reads this great series would deny the fact that this would be a perfect candidate for a high quality Artist’s Edition volume. I thoroughly enjoyed reading this again as McGregor’s story is well paced, and has enough twists and turns in it to keep any discerning reader happy. Gene Colan’s artwork is simply a prime example of an artistic master at the top of his game.

So if anyone at IDW or any other publisher is listening, I will be more than willing to volunteer the first page from my personal collection to get the ball rolling.

So as you walk down the dimly lit stairs , creaking like the bones of an old woman, into the dark, slightly dank
bowels of the back issue department, through rows of coffin like long boxes, may you have continued happy collecting.