Being an admitted “Son of the Silver Age,” I usually have something to say about that era .Today’s column is a little different. I am going to share with you a gem from 2012/2013. The series is a Fury Max title called “My War Gone By.” The Max means the book contains explicit content and is definitely not recommended for children because of its adult themes of sex , language and violence. 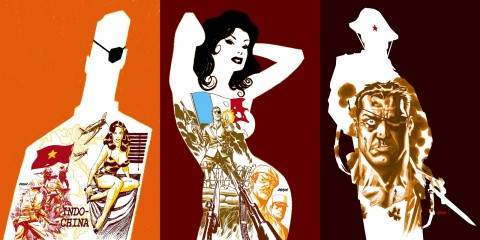 Fury Max is written by Garth Ennis and illustrated by Goran Parlov. If you haven’t seen anything done by Goran Parlov, this storyline will grab you and hook you before you know it. I see a lot of the stylings of Alex Toth in his work. He is a great storyteller and conveys great emotion with very few lines. Hence the Alex Toth reference.

When I was a kid, and Saturday morning cartoons were a highlight of your week ,there was a great show on called Jonny Quest (also designed by Doug Wildey and the aforementioned Alex Toth). One of the great things about Jonny Quest was that each week’s adventure would take you to some far-flung destination and you would learn something about its culture or politics or just where the heck it existed on the map. 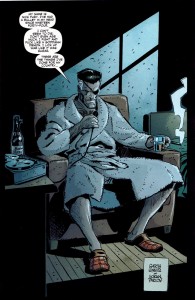 This Fury Max story lends itself to that concept. It starts in 1954 Indochina and features the French trying to control a part of the world that very soon would be known as Vietnam. The premise of the story is that Fury needs war. That it gives his life meaning and leads him to the next conflict area because a) he is good at it and b) he loves it.

The story is told in flashback sequences from Fury’s current location where he is recording his exploits for posterity, as he has grown tired of the constant manipulation of others, while the bottle  and several ladies of the night keep him company. The tale, as I said starts in French Indochina in 1954 and over the course of the 12 issue storyline  visits the “next” war, the Bay of Pigs fiasco in 1961. All the while building the ensemble cast perfectly throughout. Ennis’ storyline, complete with…colourful language throughout, at times had me laughing out loud, and Parlov’s artwork are the perfect marriage of story and art. These guys are a great team! They are a team worth checking out.

Next stop in the storyline is 1970 in Laos and Cambodia. This storyline introduces a character named Frank Castle, a talented shooter, before he became the Punisher .

In 1984 Fury is up to his eyeballs in the jungles of Nicaragua. Here we are introduced to a tough as nails miscreant named Barracuda. As Nick goes from war to war and decade to decade , the cast of characters comes along for the ride. They all age and Fury stays his same miserable self. The sub plots featuring Senator McClusky, his lovely wife Shirley, Nicks favorite port of call, as well as the ever loyal George Hatherly wind seamlessly through the years and come to the storylines conclusion in 1999.

I am not going to give away any spoilers, but if you are at all like me and find yourself searching for some great new material to read and often being disappointed, this book may be for you. From the colourful dialogue, to the built-in history lesson and the gorgeous Goran Parlov artwork  this story entertains from beginning to end. The only complaint is that it does end.

It may be available in the back issue section of your local comics shop, but is certainly available in trade paperback or you can even pick it up in a great hardcover format.

I wish this Nick Fury was used in the Cinematic universe because it has such a rich history, but with a story like this it certainly satisfies this Son of the Silver Age!