I was having a conversation with some friends the other day and we were discussing, of all things, Golden Age Romance comics. The ones that were created by Joe Simon and Jack Kirby, Leonard Starr and Matt Baker. Titles like Young Love and My Date and Young Romance. These were huge in their day and were showcases for some of the best sequential storytelling to grace the pages of four colour comics! 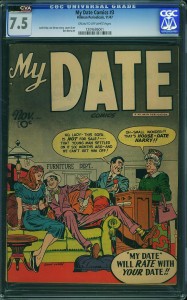 In the last ComicLink auction a book caught my eye. The only one of its kind in the CGC census . A very scarce copy of My Date #3 from 1947, in CGC 7.5 Cream to Off White, with a stunning Jack Kirby cover! Now I have a few late Golden Age/early Silver Age romance books which feature the fantastic artwork of John Romita Sr., but there is something really special about Jack Kirby’s romance books. Jack is known for his Fantastic Four, Captain America, Hulk, Thor and virtually the whole core of the Marvel Universe. His New Gods Saga over at DC is arguably one of the most enduring storylines of their universe. The one thing these all have in common is the dynamic energy he injects into everything he created!

Now anyone who knows me or has read this column knows I am a “Son of the Silver Age”, but my heart really lies with great storytelling regardless of what “Age” they come from. I also recently picked up a few more raw copies of Young Love and am therefore able to actually look at and read the books instead of just looking at the cover through a plastic case!

They are a real joy to look at. The nuance, amazingly understated, yet telling the story perfectly. Many of the stories were surprisingly realistic in the depictions of the emotional, psychological and financial challenges faced by couples after WWII. The problems with alcohol abuse and how it affected relationships. Really well done and entertaining at the same time!

After the Romance Books were no longer on top, Kirby experimented in every genre you can think of…and then some!

Between the nuance of the Romance comics and the Bombast of the Silver Age, these are just a few of the titles and characters created by Jack (King) Kirby. All setting the standard of excellence in the industry. Boys Ranch, Captain 3-D, Foxhole, Challengers of the Unknown, Fighting American, Sky Masters, Black Magic , Your Dreams, Bullseye, The Fly, and on and on!

Was there, or has there ever been, anyone who was more prolific and important to the hobby we all love? I think not!

Hail to the King!

Scottie say: For those on a budget Michel Gagne and Fantagraphics have put together a solid collection of these early books, Young Romance: The Best Of Simon & Kirby’s Romance Comics.