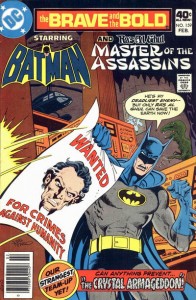 I know we’re all saving up for Valentine’s Day so I thought I’d make this Spotlight another affordable one.

Forgive me though because I’m still on this Ra’s Al Ghul kick.

Picking up a Batman #232 may not suite most of our budgets especially if we like high grade comics. There are other cool Ra’s Al Ghul issues to choose from like his 2nd appearance in Batman #235 or the Neal Adams classic “Lazarus Pit” in Batman #243. These are a bit more affordable but can still cost a bundle.

So where can I get some good bang for my Ra’s Al Ghul buck?

For this Spotlight I’ll argue with some basic math and I’ll call on a developing trend often trumpeted here on this site.

The Brave and the Bold #159 features a great Jim Aparo  “Wanted” poster cover featuring Ra’s  and the issue’s 17 page “The Crystal Armageddon” story was scripted by the great Denny O’Neil and penciled by Jim Aparo.

The Brave and the Bold was generally viewed as a Batman title. Batman hijacked the title in the late 1960s and produced some higly collected issues including #93, #103, #117 and the gem that was #79. Surely Spidey’s Marvel Team-Up took a queue from this run.

If I’ve done my homework right this issue represents Ghul’s 14th appearance and it is his 1st title appearance outside the Batman and Detective titles. Talia, Ghul’s daughter also appears in this issue, her 12th appearance I believe.

I know a 12th and 14th appearance don’t merit special treatment, that is not what I’m arguing.

I’ve looked at a list of Ra’s 1st 20 appearances and found to my surprise that this issue was the cheapest by far in the Overstreet Guide.

So mathematically speaking this does not make sense. Brave and the Bold #159 carries 62% of the guide value of lesser books before it (not on cover) and even books well after it like Batman #335 (19th app, May 81) which Guides at $16.

This issue represents some cheap Ghul.

As far as I can figure this is a titles thing. Here you have Batman, there you have Detective and in the middle you have this forgotten appearance in Brave and the Bold #159.

We’ve been surveying and commenting on the changing collecting landscape here on this site for a few years now. One of the trends that many of us tend to believe is the slow demise of title collecting in favor of specific strains of collecting. Costs make collecting the whole run of a title very difficult so current collectors have to pick and choose.

If you are a believer of such a trend then you can perhaps extend that belief into the view that Brave and Bold #159 has been getting a raw deal. Had Ra’s Al Ghul’s appearances all been in say Batman this discrepancy would be easier to understand but this appearance marks Ghul’s 4th publication.

So it must be a title thing. All the better because you and I know titles are so yesterday. Here’s a chance to scoop up some vintage Ra’s at dirt cheap prices. After that we can sit back and watch the rest of the world realize what a prize this book really is and we can gloat at the fact they’ll be coming to us for copies, at an adjusted price of course.