Recently I came across a run of very high grade, raw, Eerie Magazines. I remember when I discovered the Warren Magazines in the tail end of the 60s, that I really wasn’t quite sure what to make of them. I never really got into Vampirella, or even Uncle Creepy or Cousin Eerie, but one thing I did get into was the artwork. 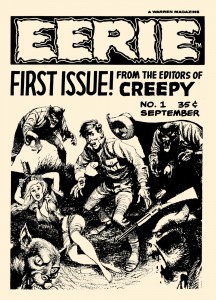 There were quite a few artists that I hadn’t heard of that were really good. Like Esteban Marotto, Sanjulian and of course the fantastic covers by Frank Frazetta!

With the recent passing of another great Silver Age artist, Herb Trimpe, I took a look through this early run of Eerie I picked up, and it struck me just how much talent Jim Warren was able to attract, especially early on.

Wow! That list contains some of the greatest talent ever in the comic book industry and all in the same issue. These artists were in virtually all of the first 10-15 issues of Eerie. These weren’t just throw away artistic entries in their respective catalogues. These were some stellar examples of the individual’s work.

Some of my favorites are the wash work done by Gene Colan and Steve Ditko. Absolutely beautiful examples of the art form and really showcasing their respective talents. You could see that the stories, which were unrestricted by the comics code, allowed the artists to really let loose, and it showed in their work.

Frank Frazetta and Gray Morrow handled the covers on the first dozen or so issues, which were worth the price of the magazine, $0.35 cents, alone.

So if you ever get the chance and find these issues in decent shape, pick them up, as they are quite reasonable and definitely  worth the price of admission.

Warren also published a war magazine called Blazing Combat which also contains some fantastic art by the masters mentioned above. I have been after some artwork by Gene Colan from Blazing Combat # 3 called U-Boat for years. Another fantastic piece that Gene pencilled and inked and added his signature ink wash to. I am ecstatic to say that I will have the complete 7 page story in about a week! I can’t wait to see this twice up artwork in the flesh and will certainly share some high resolution scans with you all.

Until then, …continued happy collecting!