There was a lot of concern among readers of DC comics when the company announced a total revamp of its iconic characters in the “New 52.”

Even long-running Superman, Action Comics, Detective and Batman were going to begin again at No. 1 with the main characters recreated with new origins, new relationships and even some personality changes.

I was leery of what they might do, but was pleased when they didn’t go too far with the changes. The basic characters are still there.

Continuity, at least to a basic degree, is important. A character’s origin, history, victories, defeats and relationships are part of what they are.

Although anything can happen in a comics universe it must be recognized that people like a good dose of reality, even in the fiction they read.

I’m convinced the reality people seek in their favorite fictional characters is why Batman is far more popular than Superman. We can identify with Batman.

He’s trained himself through determination, knowledge and skill to do what he does.

Superman? He’s a guy from another planet with power that practically makes him a demi-god. It’s much harder to relate to that, although it’s fun to imagine yourself in his cape.

In the 1960s, Marvel’s Stan Lee, Jack Kirby Steve Ditko and others created heroic characters that were “real,” not the two-dimensional caricatures of heroes found in DC comics at the time that were always right, always stalwart; never showed a “dark side.”

The result was a comic revolution that has continued until this day.

People are complicated. They have many sides to their personalities and fictional characters should reflect that of course. Exploring the depths of a character’s personality is very effective; such as exploring Wolverine’s origin and past.

Continuity in character, personality, history, goals and purpose make a character real to the reader.  Someone to relate to and maybe even allow us to learn a little about ourselves and what we may aspire to be.

Of course, there is plenty of room for change in a character‘s temperament; particularly in differing situations. People change naturally in many ways and examining another side to a character’s personality can make them more appealing.

But continuity in whom and what the character is must remain at least to a very basic degree that defines who they are. Remember the ridiculous sci-fi adventures of Batman in the late 1950s and 1960s. The Bat was out of his element and the stories were ridiculous. 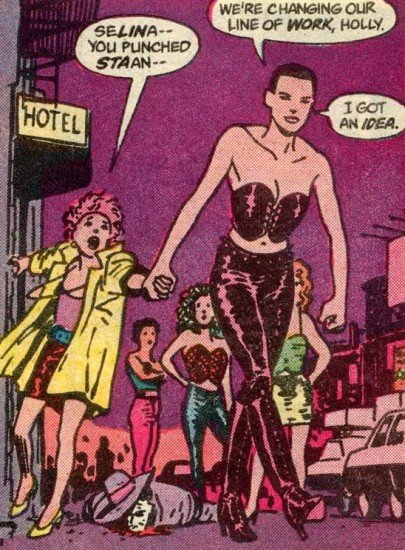 There is nothing wrong with going back and shining a light on a character’s history by adding more detail that make him more interesting, such as what Frank Miller did in “Batman: Year One.”

But when you add detail that damages a character’s history, such as Miller’s making Catwoman a prostitute, you debase the character and the original is lost.

Miller’s revamped origin of Robin in “All Star Batman and Robin” was a waste of paper and ink, saved only by a few good plot elements and Jim Lee’s incredible art work.

I’m also among those that hang my head low when a character “dies” and is then unrealistically resurrected six months later.

Now Damian Wayne is “dead” – at least until he can take a bath in his grandfather’s Lazarus pit.

Jason Todd and Bucky Barnes should never have been brought back. When a character is dead, really dead, they should stay that way. Bringing them back only cheapens the character and the comics genre in whole. 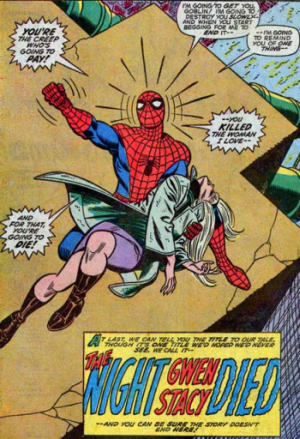 Who wants to see Gwen Stacy raised from the dead to marry the “new” Spider-Man.

Gwen Stacy and The Green Goblin are dead.

May they stay dead.

Of course, comics take place in a universe where just about anything can happen and that’s a lot of fun and a great appeal in the area of graphic entertainment. But if you take that concept too far into unreality and discontinuity, it’s not human any more and much of the appeal is lost.