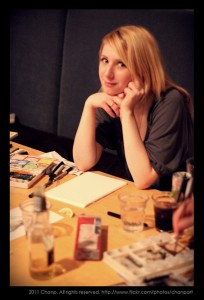 Agnes Garbowska has made a name for herself in the Toronto comic scene for her cute renditions of popular characters. So much so that she has done a few pieces for Marvel Comics. But she has now launched three webcomics of her own. Yes, three. 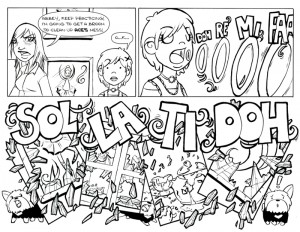 Waking Up Abbey is the story of a young girl who wakes every day to discover she has some sort of power. The first day she is sticky. The next she has become half monkey, the next ver voice has destructive power. It sounds cool and exciting, but for Abbey, it just brings trouble. It’s a bit of a Dial H for Hero, but with less of the cool crime fighting and more of the embarrassed at school. 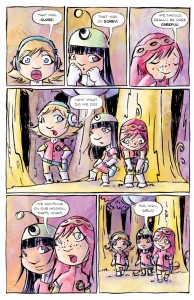 Imagination Station is the stories of three young girls. By that I mean the adventures they imagine. It’s very Walter Mittey, or for the younger reader, Calvin and Hobbes. The girls are space adventurers who start off the tale by crash landing their rocket on a strange planet. (Actually the flower garden) It’s light and cute, and if you ever had an active imagination and played out grand adventures, you’ll feel right at home. 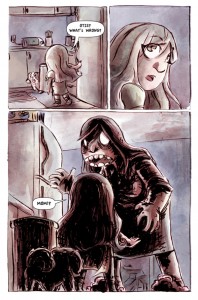 You, Me, and Zombie cause what we really need is another zombie story. Okay, this one stars, another little girl. (Are you sensing a theme?) But that’s what sets it apart. It’s Olive and her dog, versus a hoard of shuffling undead. And it’s not even a german shepherd. Elevator pitch would be Dora’s Zombie hijinks. And I don’t actually mean that as a negative. Just the idea of a cute young girl and her zombie neighbourhood is fun. Her mission? Get to her Dad the scientist in the city. (Hopefully not Racoon). 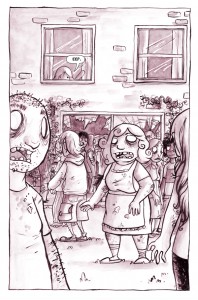 Agnes works in a small body big eye manga inspired style. Her art is ink with watercolours, some of the strips start in colour and switch to black and white as time challenges arise. There is a sameness about many of her characters, they are all little girls after all, but it’s this cute, wide-eyed look that has driven her popularity. The use of watercolours is uncommon, and Agnes really does some neat things with her colour, shifting between candy colours when the Imagination Station girls are in their make-believe world and more subtle tones when back to the boring real world. Olive’s world goes the opposite, starting out colourful and moving to monotone once the zombies move in. And she does great broken glass. 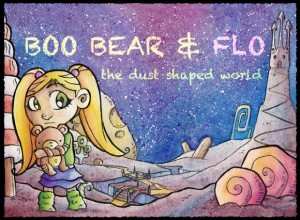 So now you are thinking, 3 comics at once? Plus kids books, Illustration work and freelance comic work, is she nuts? Super human? Well, let’s put it this way. She’s also now doing Boo Bear & Flo for the recently launched Saturday Morning Webtoons. Yeah.

If that’s not enough cute comic action for you, look into Katie Cook’s Gronk. An adorable strip about a woman and her monster.