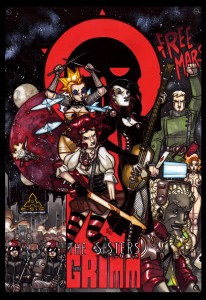 All you wanna do is play some rock and roll, maybe get some fans, a little fame, a little fortune. And next thing you know, you’re the sound of the Free Mars revolution. 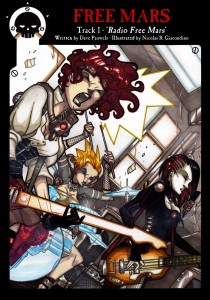 Such is the situation for The Sisters Grimm, punk rockers who end up on the front lines. Radio Free Mars is an illegal pirate broadcast, and when guitarist Taryn Vexx’s boyfriend/producer sells their unreleased track Anthem to the leader of the Martian Liberation Front, the band’s path takes a very sideways turn. 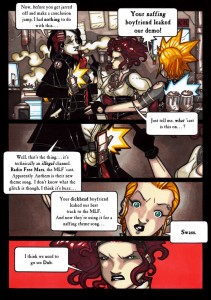 The story is full of politics, hip lingo, and rockin’ adventure. And some fun stuff like Beatles and RUSH look-a-likes in the cast. The tone is very much Mature Readers, getting into the middle of a revolution leads towards violence and the rock scene has always had connection to sex and drugs. 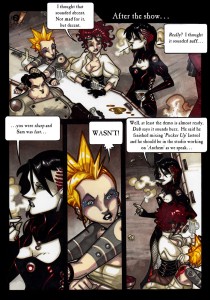 The art on Free Mars is great if somewhat dark. I would be curious to see what an uncoloured page looks like. The blacks line art is heavy and the overall colour palette is grey and, well dark. Which might suit the story, but yeah, just a little muddy to look at. The colour is well handled, it may be digitally done, but the look is markers. 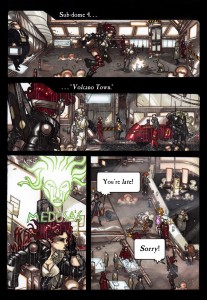 The characters are unique and easy to distinguish, and both action and quieter moments are well paced. 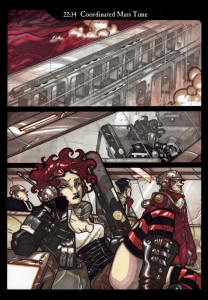 I’m pleased to also mention that while I had come across Free Mars online, I didn’t read it until the first collection showed up at my library, so kudos to them on getting an indie book into the system. 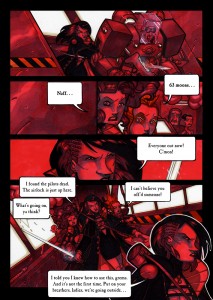 Grab your moshing boots, but keep your burner ready, and let’s rock against the man.