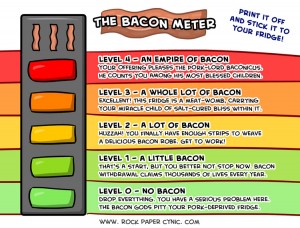 Rock, Paper, Cynic is Peter Chiykowski just diving into making comics. And he’ll tell you his earlier stuff is rough, but really, he had me laughing within a few pages. His humour is black, it’s cynical, it’s obscure, it’s risque at times and sometimes it falls flat. But you just keep clicking that next button because you just don’t know what Peter will come up with next. 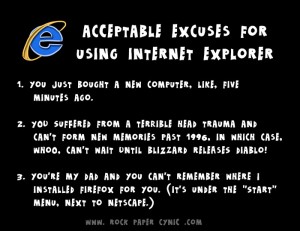 Style, delivery, genre are all wide open. One day he’ll do something you might find on xkcd, the next it’s like a lost Jack Handy. 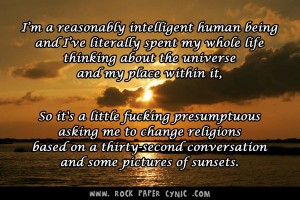 He also manages to be topical at times. And of course there’s lots of pop culture and nerdism. And it would be easy to say it’s just a knock off of some other comic. But if it is, it’s a knock off of all sorts of other comics. You could as well accuse Weird Al of being a knock off. It’s like he’s a webcomic chameleon. 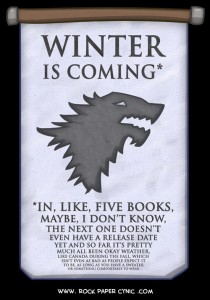 With this sort of work, it’s really about the gags, and he hits more often than he misses. But what about the art? Well here’s the trick, it’s crude when it needs to be crude, but it’s not out of a lack of skill. He knows what he’s doing. He can ape others approach. Again Weird Al comes to mind. And even when he’s doing fairly simple cartoony stuff, there is some skill hiding in there that might be missed. 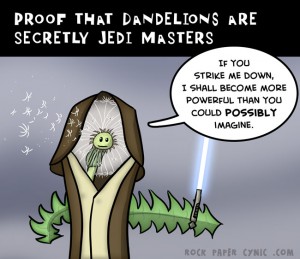 And the greatest praise I can give Paper, Rock, Cynic? I posted one of his strips on Facebook. And really, that’s what counts. 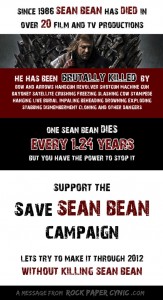