In honour of her new book Friends with Boys arriving today, I thought we should have a look at one of Faith Erin Hicks’ other comic works. A quickly rising star, Faith cut her comic teeth in the webcomic world, starting with her long running Demonology 101 and followed by a series of other stories and now a number of graphic novels. Her new book was even put up online, page by page as a lead up to the books release. (The first 20 pages are still available as a teaser) 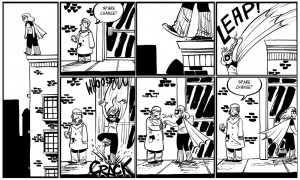 But all that great work aside, I want to focus on a side project that she’s done for her local paper and shared online. The Adventures of Superhero Girl. 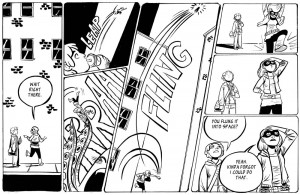 Superhero Girl is the hero in the hoodie next door. Oh sure, sometimes she saves the town from the alien tentacle monster, but most of the time, it’s far more mundane challenges. 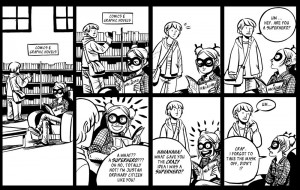 She is far more likely to deal with the dire crises brought upon by laundry, secret identity issues, boys, roommates, her Mom or the local Skeptical Guy who gives her a hard time, but you secretly suspect likes her. 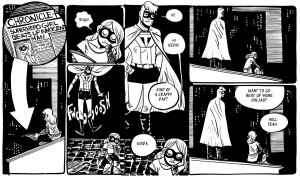 The worst might be that she has a brother Kevin who is way famous. As a superhero. You have a sibling that you get compared to? Try having a super sibling. 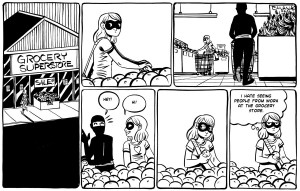 Superhero Girl is sort of the Charlie Brown of the superhero world, and that what makes reading her ‘adventures’ so much fun. You can relate to her. you can sympathize with her trials and tribulations because they are your own. Just with masks. And ninjas. 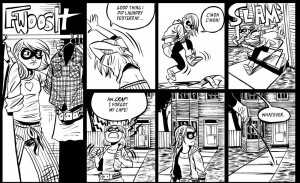 Faith’s art is always good. Has always been good. And gets better. She’s got a manga influenced style, but it’s so submerged in her Faithness now that it doesn’t come across as manga. Kind of like Bryan Lee O’Malley. What comes across in Superhero Girl is that she’s having fun with this strip. It’s playful. She gets to draw whatever she wants and have it be silly, sad or poignant and her joy shows in her very lines. 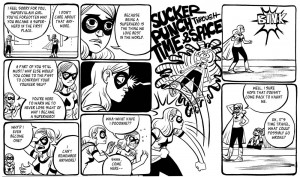 Sadly, faith has become too popular and her time is being focused on one too many project at the moment so SHG has had to take a time out. But just because it’s not currently updating, (she’ll be back in June) doesn’t mean you can go read all her thrilling adventures. 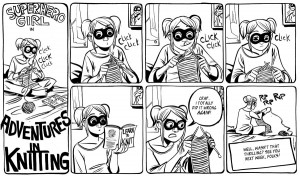