This thought came to me the other day while we were trying to get my D&D group together.

We have been playing together for about 3 years. First it started out with us playing every Monday. Then because of work, it quickly became every other Monday.

Now, members of our group have babies, spouses, work, and social obligations and it seems that we only play once a month.

This is when I thought, are we getting too old to be nerds?

I miss the days of spending hour upon hour playing video games, reading terrible online sites like gawker, 4chan and readit, and sitting around playing D&D and reading comics until 3am.

Where did those days go!

How do adults fit in the time to be a nerd?

I have to admit some people have the opportunity to be nerdy in the workplace. My D&D group alone has two animators and a guy who works in television.

But still! If you ask them, they spend way less time on their hobbies then they used to.

I know this is just a part of life, but why does it have to be! I just started getting into nerdy stuff when I was 17 years old and have only had a good couple years at it. Is it getting away from me already?

It’s times like these that I dream about owning my own comic and gaming store, and no longer being a nerd stuck in a corporate body. Writing this blog has been a great nerd outlet so far, allowing me, every week, to spoon some nerd out of my brain and splat it onto the internet. It also demands time from me, which I am finding to be a good thing. I am trying to keep up with the newest trends, and constantly thinking about what I can write about next. I feel that this is my way of fighting getting older (thus having less time to be nerdy).

I try to let me comic nerd out as much as I can, just this past Halloween I dressed as She-Hulk, although many people thought I was a sexy alien from the original Star Trek show. 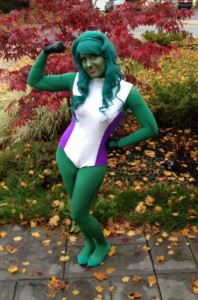 I also try to incorporate my adult and nerdy side together. Like my D&D dice bag for example: 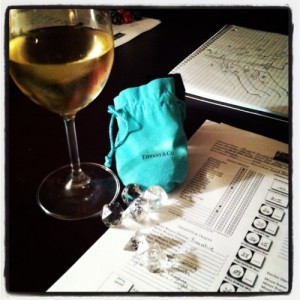 Although I try and incorporate my nerdy side into my adult life. I find it’s even harder for me now with the move of the Silver Snail. In the past I was able to walk by their store on the way home from work and pick up the items from my pull list. But, now I have no local comic store, I have to go out of my way to get comics and so far that isn’t working for me. I know a lot of people don’t have a comic store on the way home, so my question to them is; how do you do it? How do you make the time to do the things you love, like go to a comic store and pick up your favorite books? I would also love to know the struggles you may have with staying nerdy as you get older and have more life responsibilities.