Chew is a comic written by Jay Layman with art by Rob Guillroy and is published by Image. It has been on the New York Times Best Sellers list twice, and is considered Image’s most acclaimed titles. It takes place in a world where the avian flu has run rampant and chicken and other fowl are now considered to be an illegal substance like drugs. 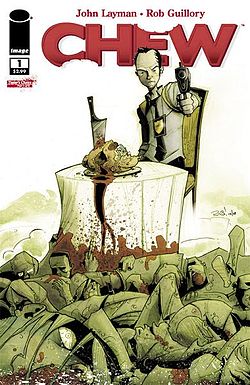 The story follows Tony Chu, an agent for the FDA. He is a man with the ability to eat something and know its whole history. Once he takes a bite, no matter what it is, Tony gets a psychic impression. He knows the object’s origin, how it lived and… how it died.

This skill becomes useful for Agent Chu when he is on a case and trying to solve a mystery.

The comic has a buddy-cop feel, which allows for interesting side characters that are full of sass. But it also has it’s darker side that includes some (by some I mean a lot of) cannibalistic moments. Mostly it’s a great detective comic filled with conspiracy, shady characters, and crazy antics. 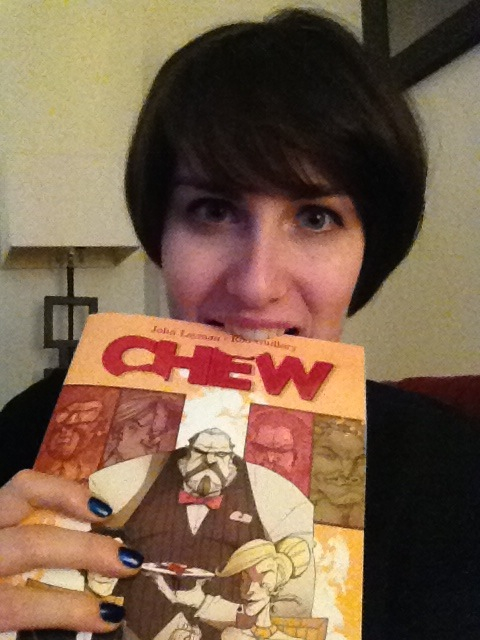 The concept is not the only reason I like the comic. I also really enjoy the clean, blocky art style. I am not a fan of a lot of messy lines, so I found this style very pleasing on the eyes. There are also a lot of quirky little details in the background if you can catch them. If you do pick this comic up, be sure to take the time to check out every page.

Most of the scenes and characters have this blocky style and I really like the way the males are drawn. However, the women in the book are extremely exaggerated. Their hips and chests are very large and their waists are very small. I’ll be honest, this is how I normally like my women… but it is extreme in the series.

Layman’s writing is witty and sharp. It leaves enough mystery that you want to keep reading to the next issue, but doesn’t keep you hanging so much that your questions are left unanswered.

Overall, Chew is a great book! I would suggest picking it up, especially if you are a fan of Transmetropolitan or The Walking Dead.