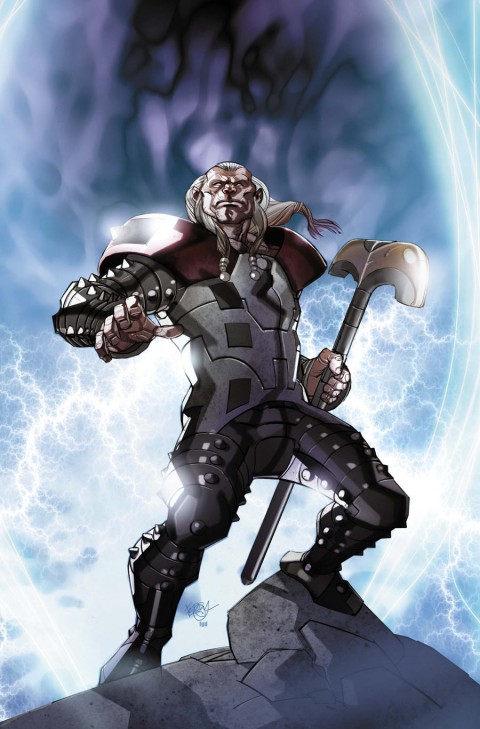 So a while back Andrew basically threw down the gauntlet and double dog dared more of us here at CBD to write reviews. I don’t think that I have the testicular fortitude to dissect a comic book with the surgeon like precision that my colleague uses, but I will throw my hat in the ring. I am not going to review specific issues unless they are one shot stories, but instead I’ll review a series as it currently is. I find that sometimes issues can be pretty up and down and a series as a whole can be greater than the sum of its parts.

So now that I have that preamble out of the way I’d like to talk about The Mighty Thor. Over the past few years Thor has been pretty hit or miss. The Straczinski run was at first quite acclaimed, but quickly became drawn out and plodded to nowhere. It did have some good ideas (the Thor/Bor showdown was great), and the series was helped greatly by the pencils of Oliver Copiel and Marko Djurdjevic, who understood that Asgard is a majestic, fantastical place and that Thor is a larger than life character, even when Straczinski just had Thor talking for the whole issue; no doubt testing out his Superman walks across America routine.

After JMS (Scott Say J. M. Straczinski) left the book (part way through the Lavertia storyline) Kieron Gillan took over writing duties and Billy Tan pencils. This team did the best that they could with the leftovers from JMS and the editorial foolishness that was Siege, there were a series of drawn out stories, something about Hel, then the series split into Journey Into Mystery (Gillan does a great job with this title) and Matt Fraction took over The Mighty Thor.

The first story arc was long, boring, and had something to do with Fear Itself. I can’t really remember. I was just about to drop the title, but then issue #8 came along. Fraction had us asking the question “who is Tantarus”?

In the aftermath of Fear Itself Asgard has a New God of Thunder in Tantarus, and no one except for Loki seems to remember Thor. I won’t reveal too much of the story because I want you to pick it up and enjoy it yourself, but Fraction crafts an excellent Thor tale, weaving together two complementary plot lines: Loki trying to reveal the imposter and Thor trying to escape permanent death in the afterlife. It has everything you want in a Thor story, huge set pieces, cosmic intrigue, and slam down, drag-out Asgardian street fights. This is Thor as he was meant to be written. Fraction even throws in the Silver Surfer for good measure.

The art is solid, but I do think that in a 5 part story we should be able to expect the same penciller. Pasqual Ferry is the artist for parts 1, 2, and 4, Pepe Larraz for part 3, and Giuseppe Camuncoli and Klaus Janson do the breakdowns and finishes respectively for part 5. All the artists have a great style for Thor, but it is still disconcerting when the industry can’t seem to have the same creative team on a book for 5 straight issues. Ferry has a very nice smooth style that really plays up the fantasy elements of Asgard and Camuncoli and Janson delivered a very Walt Simonson-esque (is that even a term?) Thor for the final part of the story. So the art is solid, but even slightly different styles disrupt the flow of a story arc. 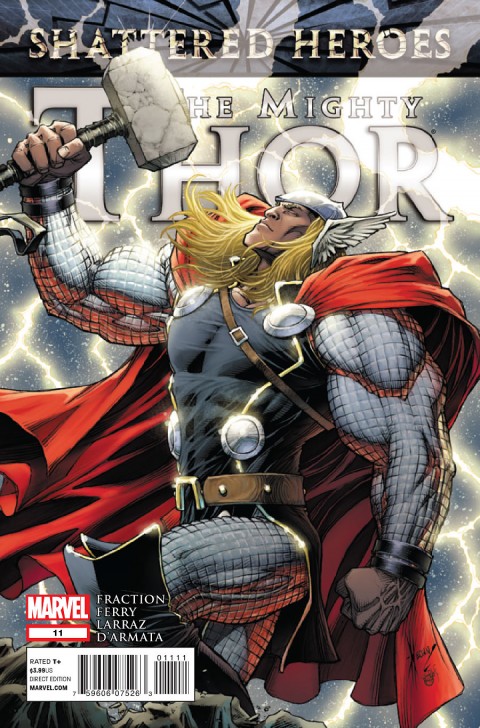 I was also impressed by all of the covers save issue 11. The others were dynamic and illustrative of what the issue was about. This may seem like a given but for many recent years covers were glorified pin-ups. Just like the very poor issue 11. On it Thor is holding his hammer. This lets me know that this is the issue where Thor holds his hammer and there is lightening behind him. Oh. Okay. Thanks, team. It reminds me of great covers where Hulk is wearing purple pants or Spider-Man is shooting webs.

Quibbles about artists being able to complete 5 issues in a row aside, the Tantarus story arc is the best that Thor has seen in years. I feel that Matt Fraction has really hit his stride and his run it will hold against any of the other great Asgardian tales. If you are an Avengers fan or want to cut your teeth on the more cosmic side of the Marvel U, this book should be on your pull list.