Working in the legal industry (my day job) the conversation at events can sometimes be dry and boring (well, at least to me). So one of my favourite questions to ask people is, what are your hobbies? When posed with this question most people tend to say some sort of sport; baseball, tennis, rowing, etc.. In most polite conversations they tend to ask the question back and that is usually when I tell them the physical activities I like to do, and the fact that I write for a comic book blog. “Comics?” they say. “Like comic books,” I reply. Then something very funny happens: nerd admittance. Nerd admittance is when someone  tells me what type of typical “nerd” activities they like to do. The fact that they like comics, video games or board games is something they seem suddenly proud to admit. Something they didn’t mention when originally asked the question, “what are your hobbies?” It seems that when around another nerd, they are very excited and happy to admit that they are one too. And, I have noticed that this happens more often in men than women. 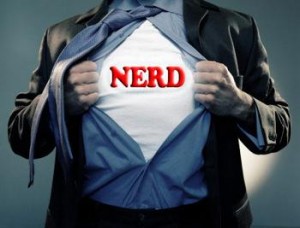 I have male friends that have admitted that they hide their nerdiness away, especially from women. But, I ask, if it is such a major part of your life why hide it? If you are dating a girl will they not eventually find out you are a nerd. Same with your friends, if you are friends with someone long enough they will find out your nerdy little secret. So, why hide it in the first place and why all the shame about being a nerd?

Some of my male friends say they don’t want to bring home a lady and have shelves of Wolverine figurines staring down at them, or that talking about comics might ruin their “game.” I say that when you meet a person, not all your hobbies will be exactly the same, and that even though they might not read comics does not mean they wouldn’t be interested in hearing about them. If you’re passionate about something, people tend to share their passions as well. I don’t fight bears as a hobby, but if someone I just met told me they did, I would be very interested. I am not saying only talk about your nerdy hobbies, obviously accommodate the conversation to keep it going smoothly, but if the chance arises to bring it up, why not? You never know, she might be a nerd too.

In the past I have been called a secret nerd. I hated this term. Just because I don’t always wear comic characters on my clothes and my house isn’t completely covered in comic book art and figurines, doesn’t mean I am hiding my nerdiness. I am happy to bring up nerd topics in conversations as much as possible and I would scream in from the rooftops if I could. Wait…I write about it on the internet, isn’t that the modern day equivalent?