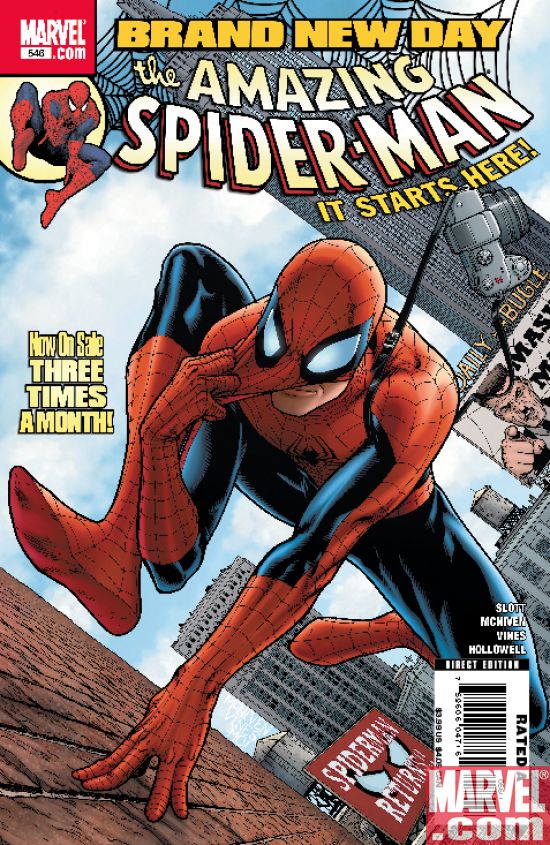 So Spidey’s Brand New Day is over and I for one am glad.  It never lived up to its potential (for reasons I will get to) and I will be happy at no longer being forced to purchase 3 times the number of substandard issues. I am fine with buying one substandard issue per month but 3 is insulting.

I have already discussed the financial implication of publishing a book three times per month, so this article will mostly be about the content of Brand New Day and how, in general, it was disappointing.

The main problem with the last few years of Amazing Spider-Man has been a complete lack of consistent quality. This would not have been difficult to predict as having a rotating creative team (sometimes changing monthly) does little to provide the reader with great stories issue after issue. 3 issue story arcs with a different artist and writer don’t suit the medium terribly well and collectors hate the feeling of being held hostage. While it is true that a collector has the option of only picking up a book when it is good, most fanboys will buy a title every month. They collect that title. So they collect it until it becomes awful and then they dump it. But when a title is great for 2 issues, and then horrible for 3, then okay for 3 more, then awful again, and then great again a collector has a harder time deciding whether to drop the book, and he or she purchases the crap to get to the good.

This was the main problem with Brand New Day but there were other troubles well; however, just to show that I am not a glass half empty kind of guy, I will talk about some of the things I liked about Brand New Day.

New Villains. I feel that Menace is a great new Green Goblin addition, the character Freak is truly original, and Mr. Negative highlighted that some of Spider-Man’s best stories are Gang-War types.

I also really enjoyed the 2-part Hammerhead story. He is a mid-tier enemy that could be great all the time but only is when written correctly. The best single issue was the Flash Thompson story where he loses his legs fighting overseas. A very interesting turn for the character and compelling storytelling.

Harry Osborn is back. Yes, it does cheapen his great death issue from Spectacular but he is a great character nonetheless.

What I am still on the fence about:

JJJ is Mayor of New York. Okay. I guess. I don’t really know.

In addition to the above-mentioned consistency problems there were some real epic failures. The Gauntlet storyline was long, boring, and completely random. This was filler issue after filler issue, disgustingly slow-paced and over-packaged to sell trade paperbacks.

Lack of Norman Osborn during the Dark Reign year. Only a single 6 issue story (so 2 months) were given a Dark Reign moniker. Osborn is Spidey’s main villain. When he is in charge of the Marvel Universe he should be in every issue.  I know that the story was basically a re-hash of President Luthor, but at least there Lex was in the Superman titles.

One Moment In Time. Boy, I don’t even know where to begin with how crummy and unnecessary this storyline was. Spider-Man made a deal with Mephisto! The reader does need to know why no one remembers his secret identity! We all assumed it was magic or whatever. Ugh. Also, the deal with Mephisto still makes me want to vomit.

All in all this was a failed experiment and should serve as a warning to any publisher trying to produce a book 3 times per month. More does not equal better.