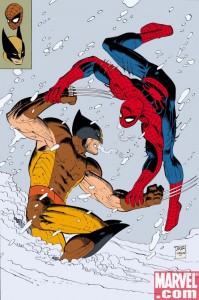 It will be no surprise to anyone when I say that Wolverine and Spider-Man are among the most popular comic book characters every created. Their popularity is greater than ever, but I do wonder if there can be too much of a good thing.

Marvel, like every other publishing company, realizes what sells and then beats it to death. Or at least within an inch of its life. Wolverine and Spider-Man have always been in a lot of books, but mostly it was their own solo titles, X-books, or guest appearances here and there. But lately Marvel has been using Logan and Spidey in pretty much every book they can, and not as a guest star, but as a main cast member.

There is barely a team in the Marvel Universe right now that doesn’t have Wolverine or Spider-Man on it. X-Men, X-Force, Avengers, New Avengers, FF, plus seven or eight solo titles (Andrew will correct me on this). They are great characters, but they don’t really work on every team in the Marvel U.

Even from a logical point of view (and I know that comic books and logic don’t always work), it simply isn’t feasible to have Spider-Man and Wolverine on so many teams. Avengers Assemble! Hey, where is Wolvie? I don’t know? In space with the X-Men? Hey FFers! Where is Spidey? Oh, the Avengers needed him. Oh well Galactus just showed up so thanks for putting the earth at stake to catch the Wrecking Crew and Mr. Hyde.

The threat that a team faces is directly proportional to the strength of that team. So the Fantastic Four were able to take on some heavy hitters by themselves because they were a powerful altered humans. The Avengers can face the Masters of Evil because there is only one Thor, one Ironman, and one Cap on the team. When the X-Men fight the Marauders we believe that they could actually lose.

However, when you start adding characters to teams that were never meant to be there in the first place things start getting pretty weird. Spidey doesn’t face anyone as high-powered in his own books, but we are supposed to believe that as long as he is with the other Avengers he can fight Ultron? Wolverine always has had a difficult time being a member of a team so the answer is to be on as many as possible? The characters were not created for this. 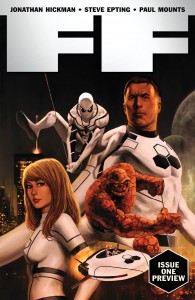 I love Spider-Man and I think that he can work on the FF, but he doesn’t really work on the Avengers. Wolverine would make a great Secret Avenger (ironically the only Avengers book he isn’t in), but doesn’t work as part of the core team.

The only notable exception is the New Fantastic Four: I could read about Spidey, Wolverine, Ghost Rider, and Hulk every month, but the universe won’t allow it. And why? Simply too much awesome.