Many readers of this website have already seen the new Guardians of the Galaxy (GOTG) movie. According to box office returns, GOTG is the highest grossing movie this year, which is really impressive because GOTG pulled in more viewers than the other big superhero movies such as Captain America: the Winter Soldier and X-Men: Days of Future Past. GOTG also sold more movie tickets than non super-hero blockbusters such as Godzilla and Dawn of the Planet of the Apes. 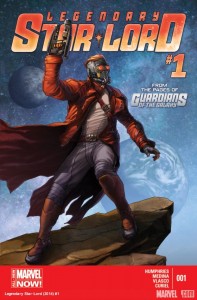 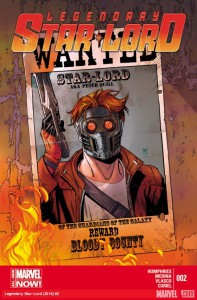 Marvel has achieved some enviable success. This movie has so many interesting elements, and they include a motley cast of interesting characters, an intriguing plot, vast cosmic vistas, and parallels and homages to Star Wars add to the movie’s appeal.  As the GOTG franchise has become such a runaway success, it’s not surprising that Marvel would take advantage of Guardians’ popularity by launching new GOTG comic book titles. In the past year alone, Marvel has already launched a third Guardians of the Galaxy (2013) title, a new Rocket Raccoon series (volume 2), and a solo Star-Lord title called Legendary Star-Lord. I just wonder when they’ll launch solo Gamora and Groot titles as well.

After I saw the movie, I became interested in how Star-Lord (a.k.a. Peter Quill) was being depicted in the current comics. I didn’t know very much about this character but I did know that Star-Lord had undergone numerous changes since his debut in Marvel Preview #4. According to this article, he was only reintegrated back into the Marvel Universe in 2006. In the current Legendary Star-Lord series, a few more details are revealed about Star-Lord’s past, so please beware of the spoilers below as I will be discussing the first two issues of the Legendary Star Lord comic and also the movie.

The first two issues of Legendary Star-Lord reveal that Peter Quill has a sister named Victoria. In the first issue, Star-Lord retrieves a Mandalay gem from the Badoon (a reptilian alien race), only to walk right into a fight with his estranged sister Victoria, who is the commander of the Spartax royal guard. In the early Star-Lord comics, it was already revealed that Peter Quill is part alien because his father was the Emperor Jason of the Spartax inter-galactic empire. However, I didn’t know this when I watched the movie and I did find the GOTG movie’s ending to be a bit weak as it was miraculously revealed that Star-Lord was part-alien and that was the reason why he didn’t disintegrate when he grabbed the Infinity Stone from Ronan. Also, the whole scene where Star-Lord distracts Ronan was funny but it did feel awkward.

As for the comic, I enjoyed the first issue more than the second issue because it delved more into Star-Lord’s past and it gives some great flashbacks into his childhood, similar to the movie. We also see more glimpses of Star-Lord’s personality in the first issue as we see hints of Star-Lord the swashbuckler, Star-Lord the womanizer, and an unscrupulous Star-Lord seeking treasure, and these glimpses are revealing, especially for someone who hasn’t seen the movie. The action picks up in the second issue as Star-Lord and Victoria encounter new characters and a new villain. I’ve only read the first two issues and it’s still early for this title, but I do hope that Marvel can maintain the quality on this title. My only complaint is that the first issue repeats a lot of details about Star-Lord from the movie.  I wish that issue #1 had presented Star-Lord’s origin from a completely new angle for the many readers who have already seen the GOTG movie.  However, overall, in these two issues, I enjoyed Sam Humphries’ writing as he reveals new details about Peter Quill’s past and personality. And the art team of Paco Medina and David Curiel give the scenes a nice glossy touch against the inter-galactic backdrop.