These 3-D covers on the DC Future’s End one-shots are DA BOMB!! I’m am digging them MUCHO, amigo mio! How do they do that? It looks so awesome!

Alright, I will run through it once again for you, Stevie.

It’s called LENTICULAR PRINTING. They take a buttload of images and print alternating strips of each image on the back of this transparent plastic sheet, which has all these curved ridges. These are called LENTICULES, which sounds like something you would order at Olive Garden with a nice marainara…but it ain’t. . When light passes through sheet it reflects from the paper underneath. When light bounces BINGETTY, BOOGITY-WOOGITY through those tiny lenses, it shows up magnified in your eye, and depending on the angle, you see different motions.

Same concept, but where those usually had two different images, today’s lenticular technology is much more sophisticated and presents a whole mess of images, providing the illusion of more movement. 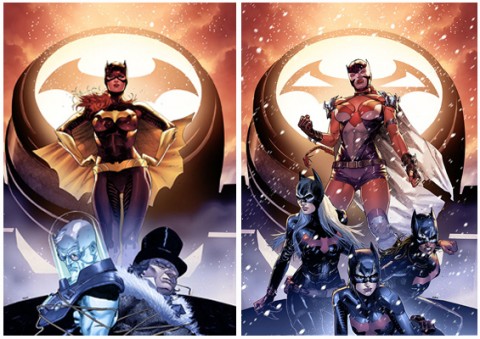 And let’s admit it, they look DAMNED COOL! 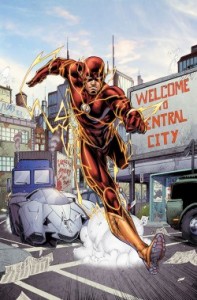 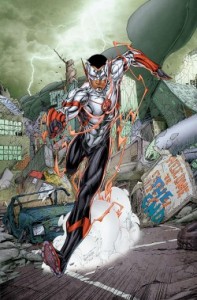 I am glad you are impressed with them, too, Stevie, but I am sort of surprised that you didn’t bring up a more obvious question, you being the capo tuti capi of SPACE/TIME CONTINUUM THEORISTS…

The idea behind the Future’s End one shots is a series of stories set FIVE YEARS IN THE FUTURE of that particular title.

Show of hands, how many of you REALLY think these storylines will still be in place in 2019? With changes in writers, editors, even publishers happening all the time? And what about the influence of movies on comics. This may shock you, but there was a time when Nick Fury WAS A WHITE DUDE! There was a time when Iron Man HAD A SECRET IDENTITY!

Don’t get me wrong, DC it’s a really Damned Cool idea. (See what I did there? DC? Damned Cool? You can use that. Call my people) But you can’t have it both ways. Either this is a fun 41-issue romp, outside of canon, or you are painting your creative teams into a corner, five years long!

I hope it’s real. I hope you guys stick to it. It will be an incredible act of creative writing and editing.

I can do it, too. Let me show you. Let me give you the Comic Industry Headlines for five years from now:

–2019: THE MAJOR COMIC BOOK PUBLISHERS HAVE BANDED TOGETHER TO STAVE OFF GROWING COMPLAINTS ABOUT THE PRICE OF THEIR COMICS. MARVEL, DC, DARK HORSE, IMAGE, AND IDW HELD A PRESS CONFERENCE TODAY TO DRAW A LINE IN THE SAND, SO TO SPEAK ON THE COST OF INDIVIDUAL COMICS. THE INITIATIVE WILL BE KNOW AS “HOLD THE LINE AT $29.99”!

–2019: AFTER FIVE YEARS OF IN-DEPTH RESEARCH, PANEL-BY-PANEL ANALYSIS AND FEROCIOUS DEBATES INVOLVING SOME OF THE GREATEST MINDS OF OUR AGE, EXPERT SCIENTISTS SAY THEY DON’T KNOW WHAT IN THE HELL IS GOING ON IN “MULTIVERSITY”.

–2019: THE LAST REMAINING TELEVISION SHOW NOT LICENSED BY A COMIC BOOK COMPANY HAS FINALLY SIGNED ON. IDW WILL RELEASE THE SIX-ISSUE MINI-SERIES “MORNING FARM REPORT”, CURRENTLY AIRING AT 4:30am ON CHANNEL 2 IN DECAUTER, GEORGIA. THE COMIC WILL FOCUS ON THE TWO-FISTED ADVENTURES OF BILL “PORK BELLIES” RADCLIFFE, AND SAM “SORGHUM” SLATTERY, AS THEY TRAVERSE THE EARTH-SHATTERING REALMS OF SOYBEANS AND HOG FUTURES

–2019: AND IN ENTERTAINMENT NEWS, ACTOR JACK HUSTON TOLD INTERVIEWERS THAT WINNING THE BEST ACTOR OSCAR FOR HIS PORTRAYAL OF STEPHEN STRANGE IN THE MARVEL MOVIE “DOCTOR STRANGE” IS THE HIGHPOINT OF HIS CAREER. HE ALSO PRAISED THE OTHER NOMINEES IN THE CATEGORY: ROBERT PATTINSON (SANDMAN: THE MOTION PICTURE),  ANDY SAMBERG (“AMBUSH BUG: THE MOVIE”), AND JONAH HILL (“LOCKJAW: THE FILM).