It has been a while since I’ve followed the Astonishing X-Men comic book series. I hadn’t really followed this series since the great early issues by Joss Whedon and John Cassaday, so I decided to read up on Astonishing X-Men issues # 44 to 47, which was the “Exalted” storyline done by the creative team of Greg Pak, Mike McKone, and Rachelle Rosenberg. 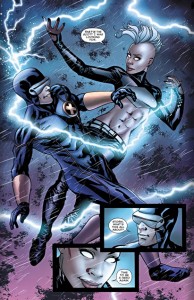 These issues made up my summer reading this year because I didn’t have time to read these when they came out in late 2011 to early 2012. If you haven’t read these issues, be warned, there are some SPOILERS in the rest of this article.

This story arc starts off with a great kiss scene involving Cyclops and Storm. I found this scene shocking as I thought Cyclops would never get romantically involved with Storm or any other fellow team member. Yes, they do lock lips in issue #44, but it turns out to be OK because Scott is kissing a less heroic version of Storm, who is from a parallel universe. She is not the Storm whom we know and love, so it’s not as bad because Cyclops was seduced by a more dubious version of Storm. In fact, this parallel universe’s Storm is helping a villain named Saviour to abduct alternate versions of Cyclops and other mutants so that their mutant powers can be used to power the machinery that will preserve the damaged planet in this alternate reality.

As the story progresses, we learn that the war between mutants and humans led to Magneto’s death and that Magneto’s dying act was to destroy the earth’s core, which damaged the physical integrity of the planet.  Saviour and this world’s heroes enact a desperate plan to save the planet and its inhabitants by harnessing the power of mutants through energy collecting machines to repair the magnetosphere, but this costs the mutants their lives.  This global threat unites humans and mutants in a common cause.  Greg Pak does a good job of exploring the idea that ordinary humans can eulogize and worship the heroic mutants who give their lives to save this world. In fact, the humans even erect monumental statues as memorials to Cyclops, who plays a key role in saving their world.

In the parallel universes, theme, we see interesting alternate versions of X-Men characters whom we know and love. For example, Nightcrawler is a backpack toting child, so he talks like a brat. We see an alternate version of the Wolverine, who is thoroughly British and more genteel than the version that we normally see. I find that the “Exalted” storyline has some similarities to the Fringe tv show which was airing at around the same time that these issues came out. You may not have seen the Fringe tv show, but it had an excellent plot revolving around parallel universes, and the main characters met different versions of themselves. We have interesting interactions such as an uptight version of one character meet a less inhibited version of herself from another universe. In this story arc, we see our heroic version of Storm meet the less noble version of Storm (i.e. the one who seduced our Cyclops).  There are other interesting meetings such as Emma Frost meeting her alternate self.

In closing, “Exalted” was a decent story arc. I like the way that Mike McKone captures very genuine facial expressions in all the characters, and Greg Pak writes an interesting yarn about our versions of the X-Men encountering less noble versions of themselves. And the true identity of Saviour is pretty shocking. I didn’t find much at fault with this story arc except to say that this was not a truly inspired X-story like Joss Whedon’s “Gifted”, but I do recognize that a comic book writer can’t “hit a home run” every time. While this was not Greg Pak’s best work (“Planet Hulk” and “World War Hulk” were pretty hard to top), it was still an enjoyable read on a quiet, summer day.