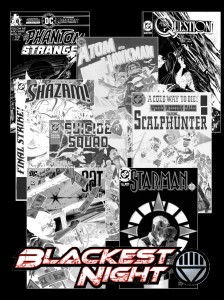 It looks like DC has some plans up their sleeve to keep us occupied during the lonely month of January. It seems that Blackest Night will skip January and instead there will be some other book that will tide us over.. but, DC isn’t stopping there. Oh no… check out this news flash:

How big is Blackest Night?

So big that its power to make the dead rise has now moved from expired characters to old canceled series.

That’s right, this January, the BLACKEST NIGHT mini series skips a month to make room for a very special Blackest night event. Eight classic titles from DC’s past will return from the dead for one month only to celebrate this mega-crossover throughout the DC Universe. Each series will pick up on its original numbering and feature characters from their original runs as they deal with the events currently unfolding in the DC Universe. And I have to say, this has been one of the more fun projects we’ve put together.

We scoured the list of series from the 60’s, 70’s, 80’s, 90’s and today to find the right titles to bring back from the dead. They are, in no particular order, as follows;

– POWER OF SHAZAM #48 Eric Wallace tells the tale in which Osiris returns from the dead to “chew the fat” with a very powerless Billy and Mary Batson.
– CATWOMAN #83 Fabian Nicieza has the original Black mask explaining to Selina why shooting him in the head was a bad idea.
– SUICIDE SQUAD #67 Gail Simone and John Ostrander are ringside for the epic fight between a very dead Suicide Squad and a possibly soon-to-be dead Secret Six.
– QUESTION #37 Greg Rucka has the one answer for when two Questions meet.
– PHANTOM STRANGER #42 Pete Tomasi reveals what Blackest Night means to the Phantom Stranger.
– WEIRD WESTERN TALES #71 Dan DiDio (weirdly talking about myself in the third person) lets you know what all the dead old west characters are doing in the new west today.
– ATOM AND HAWKMAN #46 Geoff brings you the double date from Hell, The Black Lantern Hawks work to reunite Atom with his long dead love, Jean Loring.
– STARMAN #81 James Robinson returns to the book he made great and visits some old haunts.

So there you have it! Eight great issues to show the amazing reach of this amazing story. And in case you are wondering why we skipped a month BLACKEST NIGHT, well, that’s just to give the immensely talented, and immensely overworked Ivan Reis a chance to prepare the over-sized final issue of this series out this March.

Just so you don’t get your hopes up, James Robinson has twittered this announcement: “Just so everyone knows now, Blackest Night Starman will feature a Black Lantern Starman. It will feature Opal and characters therein. But it will not have Jack Knight. He is happily in SF like me. And if he ever came back, it should be something bigger then a single issue. But I am very happy with the issue I’ve written. I think you’ll dig it.” He then went on to add that Jack is currently in San Francisco ..like him*.

While it’ll be nice to see some new issues of the unjustly cancelled Catwoman or the gone too long Suicide Squad (and with Ostrander and Gail Simone writing? that’s a huge coup!)  Also, I mean.. I’m a fan of the Denny O’Neil Question and I enjoy Rucka’s take.. so I’m automatically going to pick that up.

I just wish the topic didn’t necessarily have to be that of Blackest Night. I just haven’t been digging the overall storyline. Maybe if it focused more on this ‘war of light’ (like the Green Lantern titles seem to) and less on zombie versions of dead heroes, I’d be into it more. I hold out hope though because Johns is a hell of a great writer when he wants to be. Again.. how does this make you guys feel?

Feel free to email me.

*Did you ever get the feeling that James Robinson just wrote himself into the DC Universe with Starman? I loved Starman to pieces and think it’ll stand for a very long time as one of the best longform storytelling in comics.. but at the same time.. there’s creating a character and then there’s being Woody Allen.