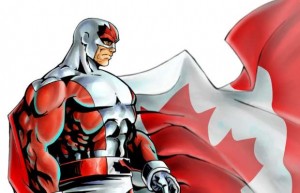 Canadian screenwriter Arne Olsen has been chosen to write the script for Richard Comely’s still on track Captain Canuck big screen feature film. Olsen’s screen credits include Mighty Morphin Power Rangers: The Movie and Cop and a Half.

Regina, Saskatewan’s Mind’s Eye Entertainment owns the movie options to Captain Canuck and their progress on the film’s development had seemed stalled lately so getting Arne on board is great news.

Mind’s Eye has a solid track record of movie and television production, I just hope they pick the right guy to play the captain.

Here are a few of my suggestions for the movie; if they listen to at least 3 of them they will have a hit film on their hands.