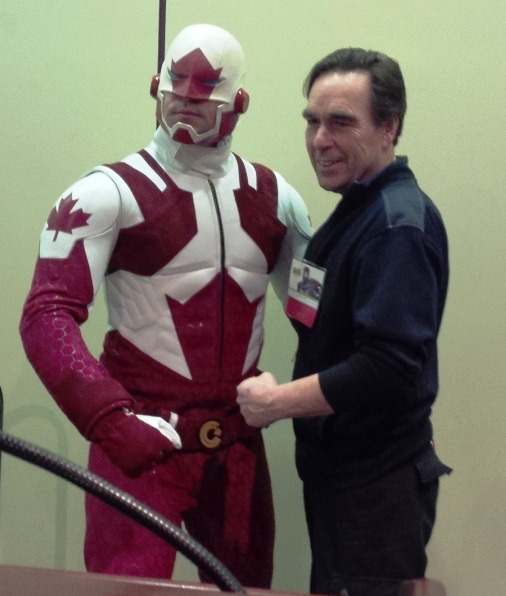 The “Captain Canuck Team” had many different avenues that they could proceed to bring Captain Canuck back.  The production team decided that the animated series was the way to go first.  After a successful crowd-funding campaign, they were able to generate enough revenue to produce the first season, with a second season on the way.

But animation isn’t the only project that is on the way for Captain Canuck.  The panel also announced that there is more on the way: comics, merchandise, toys. Captain Canuck is coming back to the printed page starting with a 6 issue arc comic written and illustrated by Kalman Andrasofszky.  Each issue will include a 16 page lead story, featuring the modern Captain Canuck (which was redesigned by Kalman), and a supporting back story feature that will build more on the biographies of the Captain Canuck characters.  There are plans for 2 story arcs for the comics, and depending on the success of the series, it may lead into it becoming an ongoing title.

Kalman Andrasofszky announced that the Captain Canuck comic’s goal is to be a Canadian production.  Canadian artists will be featured on the series, and will use Captain Canuck to showcase Canada’s uniqueness and culture. There is a lot on the horizon for Captain Canuck, and we are only seeing the start of it now.  It has been a lot of long hard work for the Captain Canuck team, but it has been a labour of love.  All of the production team started off as fans of the character.  You could tell there is a huge demand for Captain Canuck.  There are some of us who forgot who the character was.  There are some who are discovering him for the first time.  Fans in general are looking for hero we can identify with.  A hero of our own.

The one comment that stayed with me after the panel about the creation of Captain Canuck. ‘Richard Comely landed on something iconic.  He created a legacy that the new creators are carrying forward, but also doing right by what Richard started in 1975.’