I attended Fan Expo 2011 Thursday and Saturday.  I was there Thursday early to get my name on the list of artist commissions and Saturday to feel the show at its busiest and pick up my art.  The rest of the time I spend editing and posting our plethora of Fan Expo coverage.  Here’s my haul from the show. 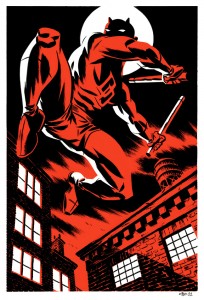 This was the big one for me, a Michael Cho Daredevil.  I posted about this piece’s creation earlier and knew the minute I saw it this had to be mine.  I actually contacted Cho about an hour after he listed it on Twitter and it’s a good thing I did because he had a torrent or requests to sell.  The character’s motion is so fluid and intense, well framed between the buildings.  The shadowed face really appeals to me, as do the other shadows. 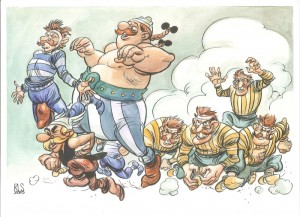 While chatting with Cho he told me to check out the amazing art from Ron Salas. Fans of Comic Twart will recognize the name and most likely the art I picked up, a painted Asterix piece.  He had a ton of great art for sale and was doing commissions but this one leapt out at me for its colour and whimsy. 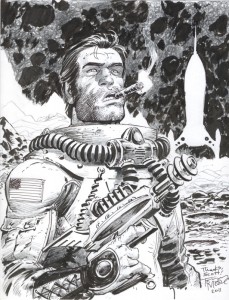 Tony Moore ran a lottery every day: put your name and request down and he would pick three to do every day.  If you were picked you paid $200 and would receive the piece at the end of the day.  I’ve always loved his Fear Agent covers so I put my name in almost as a lark and was picked; I guess most people were asking for zombies. 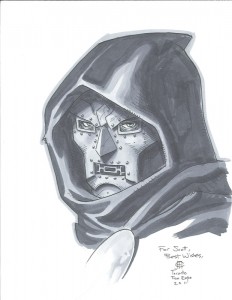 Jim Cheung was my number one pick for a sketch at the show and I waited patiently at his table.  He was very polite and has a wonderful Hong Kong accent. I was a bit unsure of what to pick as he was only doing headshots. With headshots you want to pick someone with a good costume to get some depth.  While I would normally pick Galactus I saw a recent Doctor Doom image Cheung had done for a cover and it was really nice, as is my finished sketch.  He was asking $120 which seemed like a fair price. 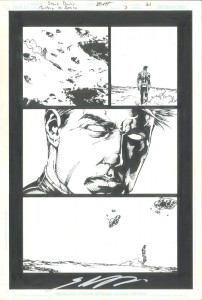 I stopped buying comic pages a year of two ago because the prices had risen dramatically and I felt sketches or commissions were a better way to go with my dollar.  I had put my name down for a Shane Davis Captain Comet headshot (yes, a weak character choice for just a headshot but it was my favourite character from Davis) but then I spotted very economical pages available.  He had a stack of big name characters with big prices but the Mystery In Space pages were in the $60 an a real deal.  This page already had a nice headshot and was less than the $80 commission price so Davis graciously let me off the commission list and I picked up this published page. 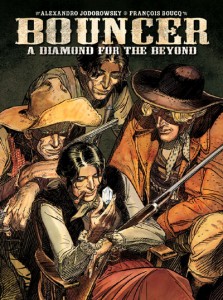 While bargain hunting I also picked up The Bouncer volume 1 from 2002, not the just released hardcover.  Two volumes were published oversized by Humanoids in 2002 and this was the first one with a full origin.  As well I picked up The Spirit Archives volume 15; one more to go for the full set.

I had three full bags of books to be signed but had to park so far away from the show they were abandoned in the trunk.  Cruising the show for two days it was really busy and I probably had too many books to haul around.  Half of them were Chris Claremont who didn’t make it anyway Thursday so in a way I avoided a lot of excess carting.

I wanted a Cameron Stewart sketch but he was only doing headshots and I really wanted a Slam Bradley, which didn’t seem a fit.  Bob McLeod had a beautiful space girl in an Adam Strange like costume done in pencils.  I asked if it was for sale and he said it was and he would ink it for me.  I came back later in the day Saturday but Bob was packed up; I circled around a few times but he didn’t return.  I hope he doesn’t think I shafted him for the commission.

Looking back it seems I went with a lot of already completed art from this show. I love commissions and getting sketches of who I want but it’s a crapshoot whether or not it turns out great.  Visiting an artist at his table and looking through what he has done already lets you choose something wonderful and you get to take it right away.  I’m learning to appreciate those artists who complete a number of sketches before the show and then sell what they brought, sit back and relax while interacting with the fans.