Today is the big day for the DC 52 relaunch with the release of Justice League issue one.  I received an email this morning at 7:00 AM EDT proclaiming “Buy Now At The DC Digital Comics Store“.  Here’s the message in case they change it later. 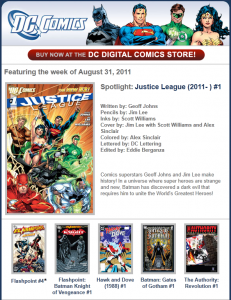 I quickly clicked the link and was brought to the DC Digital Store, courtesy of Comixology, where I was presented with the following. 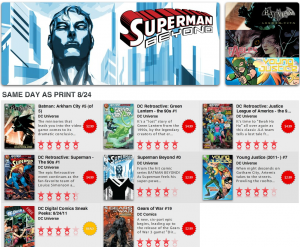 Yes, that’s right.  No digital comics for the big release, just last weeks’ comics.  Since the print version was in stores yesterday for the big midnight release parties around North America I find it hard to believe the digital version isn’t ready.  Robot 6 reported getting a message indicating 2:00 PM EDT release but I couldn’t locate that.  There’s also a lot of talk about pirate copies floating around, but that’s been happening with new comics for the last decade at least.  I was able to easily locate a copy, but again no surprise.

Digital day and date release has been the talk, DC’s big chance to reach the casual fan.  Lots of mainstream press has gone out promoting this new launch to the mainstream reader in an attempt to attract their dollars.  Midnight launches are great for comic book fans who already frequent a comic book shop but this was supposed to reach a wider audience.  I could let it go with a mid day digital release had they not sent out the email telling me to buy it now.

This isn’t a slap-dash operation: DC has carefully garnered the press and its collective attention for more than two months all leading up to today.  Whether the blame lies with DC or Comixology it’s a strike against the DC 52 relaunch.