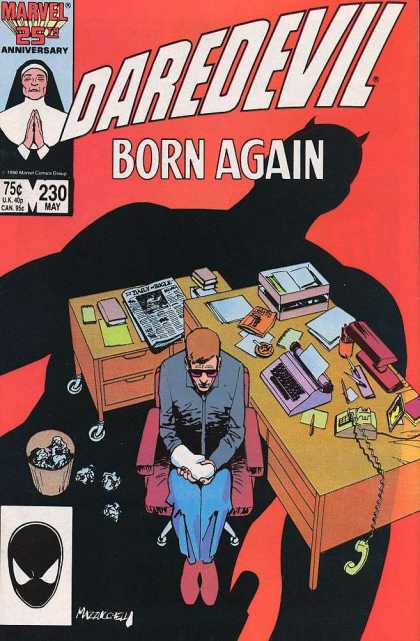 Kane, who is a Daredevil fan himself, confirmed the news on Twitter.

“I guess it’s official! ‘Change your life.’ -Murdock,” Kane said via his Twitter page. “We’ll do our best to do right by him (and the fans!),” he later tweeted.

It’s thought his enthusiasm for the project helped net him the job.

Kane only has one film credit on his resume beyond his work on Fringe, although he has also worked on the crime drama Brooklyn’s Finest, DreamWorks’ View-Master movie, a Richard Pryor biopic, and has drafted The Historian, Columbia’s adaptation of Elizabeth Kostova’s vampire novel, Heat Vision reports.

Rumours first emerged in mid-March after David Slade was announced as director that the reboot will draw upon the Born Again plot for inspiration.

“(It will be) a very strong character-driven take on Matt Murdock. It will (bear) no relation to the previous Daredevil movie in any way,” Slade said in a Spinoff report.

“Yes, Brad and I are meeting daily to work on the script, and yes ‘Born Again’ is our main source material with all its grittiness,” Slade tweeted.

Born Again was a seven-issue story written by Miller in 1986 depicting Murdock’s drug addicted girlfriend Karen Page selling his identity as Daredevil in exchange for a shot of heroin. The information eventually becomes known to the Kingpin who then launches a vehement campaign to completely destroy the life of his nemesis – he dismantles Murdock’s life causing him to lose his money, his home and his law license – finally pushing the ‘Man Without Fear’ over the edge.