The director of many a well known film including Halloween, Escape from New York and Assault on Precinct 13, just to name  a few, is now set to adapt  Randy Queen’s Darkchyld comic series as a film. I’ve never read the Darkchylde series mysel,f and I have only seen a bunch of copies in our bargain basement section with the usual 90’s Witchblade-esque covers of a scantily clad woman with her naughty bits barely covered. Intriguing as a male, yes, but as a comic fan not really. To do some research on this property, I turned to Wikipedia which describes the series:

Darkchylde is the story of Ariel Chylde, a cursed teen who can become the creatures from her many nightmares, and then must save her small town from the forces of darkness she’s set free.

It actually sounds pretty neat. It’s got an interesting power for the main character and I can’t recall it being done before. But according to the Wikipedia article on it:

Darkchylde was launched as a comic book property to immediate success in the summer of 1996. The book shot to the # 1 hottest comics spot in Wizard, where it stayed for nine months collectively in both Wizard and Combo magazines. The book outsold Spider-man, Hulk, Superman and Batman in America, and quickly garnered an unusually large female following, in stark contrast to the traditionally male comic book market.

I kind of find that hard to believe, especially with the lack of citation. I wasn’t tracking sales figures in the 90’s when I was reading comics, so if anyone knows otherwise for sure, feel free to correct me. Anyways here’s the poster that was released with the press release and the WETA test footage. 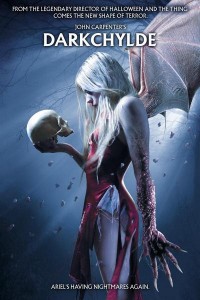