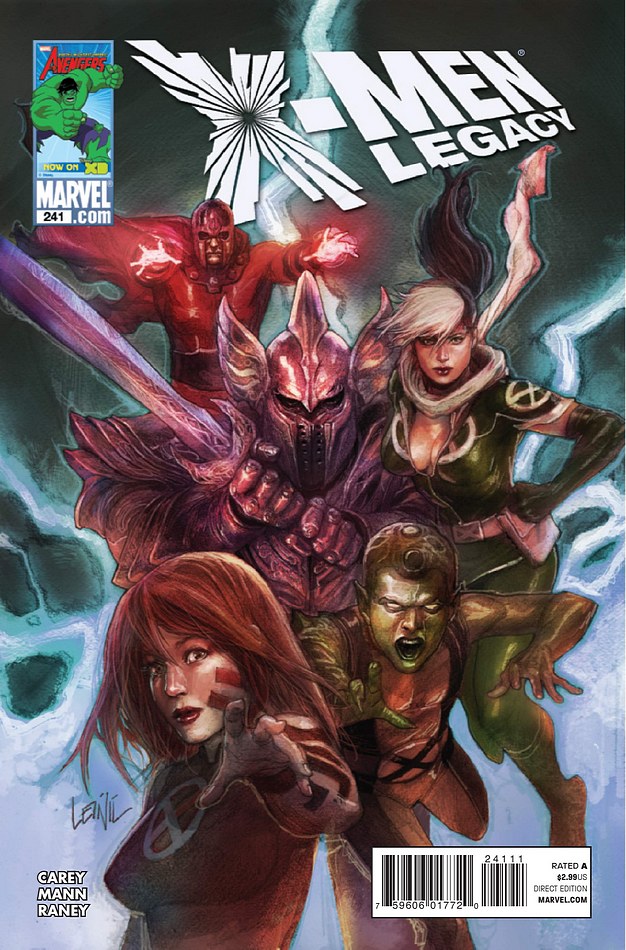 Come one, come all!

Okay, so in an effort to come up with an overly enthusiastic introduction, that’s as far as I made it. Sorry. Anyway, this past week we saw the latest issue of Mike Carey’s X-Men Legacy released. This is the final issue of the first post-second coming story arc, Collision. It’s primarily featured Magneto and Rogue with a handful of newer mutants in opposition to a group known as The Children of the Vault. How did the issue and the larger story shape up? Good question.

In the wake of Second Coming, Rogue and Magneto escort the X-Man Paras to Mumbai, his native land. After a freak energy storm left Paras’ brother comatose, he intends to fulfill his brother’s arranged marriage. Once there though, another lightning storm strikes and a mutant runaway named Luz joins Rogue and Magneto. Trouble wasn’t far behind, as the people chasing Luz followed her and eventually captured both Magneto and Rogue.

The issue begins in Paras’ family home. He and the rest of the remaining X-Men accompanying him on his trip prepare a rescue effort to retrieve their friends. Meanwhile, in the Children of the Vault’s headquarters Rogue attacks her captor and frees herself, while Magneto continues to be a thorn in the sides of the 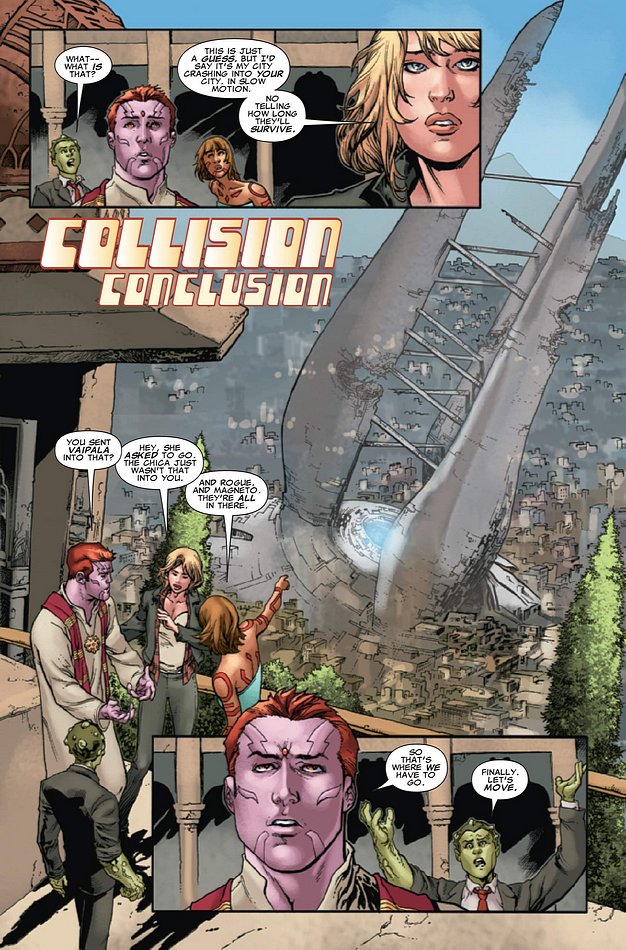 Vault; overloading the electricity flow of their generators in order to make a deal with them. Magneto attempt to bargain for the life of a young girl at death’s door, but his “friends” aren’t convinced and attack him. One of the Vault members attacks the others with a large metallic sledge-hammer, preventing them from commencing their assault on Magneto and the girl.  He hilariously uses it to force the man holding it to strike one of his comrades.  Rogue easily escapes from her cell, and begins to look for Magneto.

Led by Paras, the young mutants make their way to the Vault’s headquarters, as Magneto fights for his life against the remaining vault members. Luckily Rogue arrives in time to save Magneto’s behind. The children arrive covertly, as Luz uses her ability to shape shift and copy herself to mimic the Vault’s guards. She helps Rogue, Magneto and company escape, and then confronts Cadena. Focused on killing the mutants, Cadena repeatedly demands to see where they are, so Luz shows her. Rogue and Magneto continue their escape, but are met with guards that pose no threat and were quickly disposed. More arrive and things look badly for a moment until Paras fights back, betraying his religions beliefs. In the final leg of their escape, Magneto destroys the device maintaining the Vault’s presence on earth. With it destroyed, the mutants return to Mumbai’s surface. Paras has one final conversation with his family about the life he has chosen to lead, questioning the place of evil in the world and the methods to combat it. He dumbfounds his father, says goodbye to his would be bride and leaves an X-Man.

Altogether the art has been solid throughout the entire story arc. Mann and Raney’s pencils have been consistently good, while the colouring work has complemented it quite well. The inking work doesn’t really feel like it has a presence throughout the book. There are points where it’s obvious and routine, such as the shading underneath a characters chin or jaw-line, outlines, or within a building’s structure and crevasses. It’s most apparent throughout the underground complex of the Vault, where the darkness of the corridors can be accentuated. The art in this book though doesn’t really allow for the inkers’ talents to come through. Instead the colourist has command of most of the issue, and turn in some nice work.

I thought the book had some pretty good panel transitions. One of the better ones showed one of the Vault’s brothers hunched over on the ground, resting on 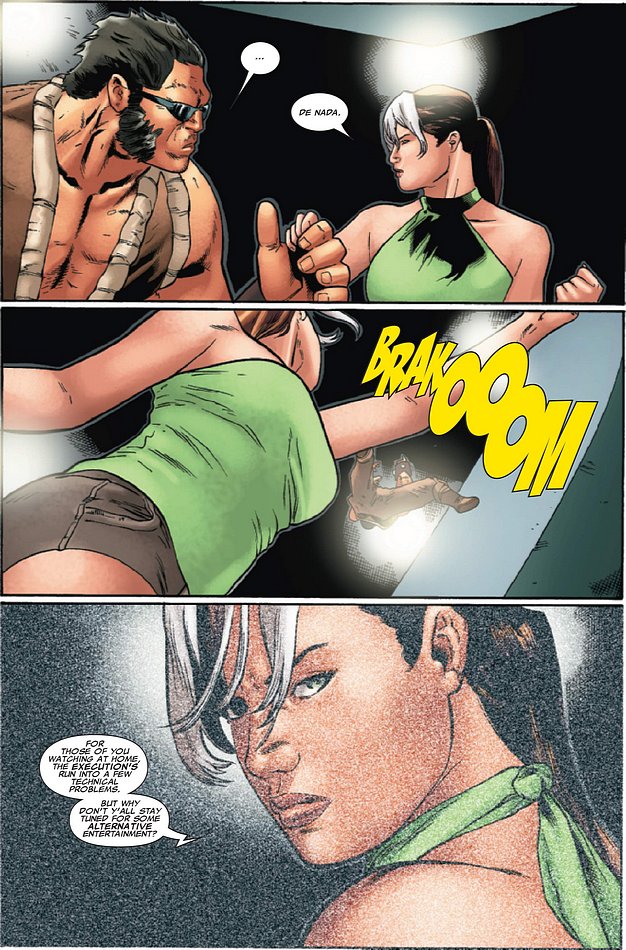 his knees. A female hand comes into the panel, offering to help him up. On the next page the brother discovers it was Rogue, that she had taken his strength as her own, and then belts him hilariously across the room.  In another panel, I thought the artwork synced up well with the dialogue towards the end where Luz catches up with Paras, where she says she “can paint some pretty pictures.” As she says this, Luz sticks her arm out, sticks her thumb; almost envisioning the artwork. I thought it was a nice touch.

The two panels that impressed me the most though were the grainy/snowy vision of Rogue on the television monitor after she slaps the guard silly, and the scene later in the book where Magneto fights off the Vault as the structure violently shakes. The Rogue scene lets all of the team come together to create this really cool vision of her, where her skin tone comes through in different shades, there are specks of white in some areas, complemented by the inkwork. In the Magneto scene, it feels like the team caught the detail of every reverberation, and all I can do is applaud.

I’ve not really enjoyed this story arc, and have considered it a bit of a letdown considering how solid the book has been throughout Carey’s run. I never really felt invested in any of the newer characters such as Paras or Luz, although their individual stories have potential to expand on. I feel like there isn’t much left though for Paras. 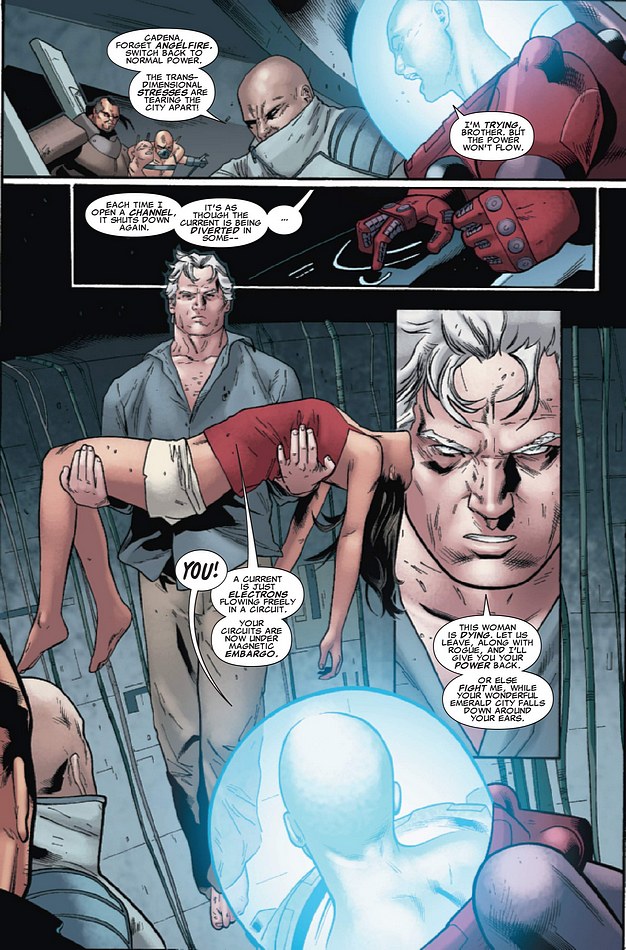 If we’re going to treat this arc as an essential piece of his story, how long can you stretch out the conflict between what he knows to be right and his religious heritage? I don’t know that there’s another worthwhile story you can tell with him, leaving me to wonder if he’ll be left as a secondary character. There’s the obvious eventual story where Luz will find a way back to the earthly plane to meet up with Paras, but beyond that it’s hard to say where you go with either that will offer interesting stories.

With that said, by the end of this final issue I understood the story Carey was trying to tell. Central to it is the conflict Paras faces when going home. Once there he has to grapple with the man he’s become while with the X-Men and the battles he’s faced in contrast to his heritage and familial obligations. The two directly conflict with the other, and throughout the story we see Paras fight the expectations placed on him from several angles; the defiant and prodigal son, the accepting and honourable son, and finally someone who comes into their own as an individual. It really feels like the essence of the story was to force us to question our thought processes and philosophies through Paras’ interactions with his family, perhaps throwing into flux the absolutism of our belief systems.

Although rocky and uninteresting in the beginning, the story as a whole is quite good. I’m reserved on any future storylines featuring the principal characters outside Magneto and Rogue, but as an entire piece it improved by the end. It seems we’re headed back to San Francisco next issue, so I’ll be looking to see what Carey does with this book next.