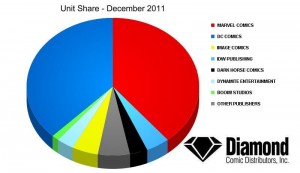 I like that DC is now making Marvel work for that top spot, two healthy industry leaders that are actively competing for supremacy is better than one dominant one resting on its laurels. I also like a strong rest of the pack! Ideally all the other publishers should hold more share collectively than either Marvel or DC. The need for strong alternatives like Image, IDW, Dark Horse etc has never been greater. A healthy rest of the pack also keeps the big two on their toes and makes the comic book scene more innovative and altogether better.

Walking Dead Volume 15 was the runaway winner for top Graphic Novel. Nothing says Christmas like Zombies!