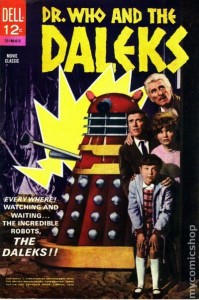 Here’s another submission from Undervalued Spotlight stalwart Mike Huddleston. Mike sure knows how to pick winners and this week’s submission is no exception, it’s another keeper.

Mike was obviously late for the bus because his write up this time is short and sweet but he’s given me his blessing to add on and fan the flames of desire for this book even more.

Here’s a part of Mike’s email… “This book is based on the first Doctor Who movie from 1965-66 era starring Peter Cushing as the Doctor. The movie was based on the very first story (written by Terry Nation) about the Daleks from the TV series in 1963. Doctor Who and the Daleks was printed in the United States only and re-printed by Marvel UK in the 90’s.”

“The movie and this book were the first splash of color for the Doctor as the early TV series was in black and white.”

Doctor Who and the Daleks is Doctor Who’s 1st appearance in the US. The adapted Terry Nation story boasts a cool Peter Cushing (aka the Governor Wilhuff Tarkin aka the Grand Moff aka the commander of the Death Star in Star Wars)  cover and some solid art by Dick Giordano and Sal Trapani.

It was released as a tie-in with the US release of the feature film released in the UK a year earlier.

The good Doctor would not appear in another US comic book for 14 years, resurfacing in Marvel Premiere #57 (Dec/80). Note the Marvel cover incorrectly claiming it the “1st American comic appearance!”

These Dell one-offs can be highly prized comic books and seriously collected by Dell completists, just look at the demand for Dell’s The Beatles (Sept/64). Also consider the high demand for the DC Comics James Bond one-off in Showcase #43 (Apr/63), it too is a very sought after collectible.

Doctor Who famously made his first appearance on British TV on November 23rd 1963. Why doesn’t it surprise me that there is a Canadian connection? A Canadian BBC exec named Sydney Newman is credited with developing the program. Superman! Canadarm! Justin Bieber! Telephones! Basketball! Doctor Who! Canadians are awesome eh!

The very 1st episode had a bit of an ominous start as it aired on the BBC a day after the assassination of US President John F. Kennedy. It would have been tough to coral the  Kingdom’s attention when the leader of the Free World is gunned down. A savvy BBC re-aired this first episode just before airing the second a week later. “I say, let’s run it again then!”

The show was an instant hit and has gone on to become a virtual industry onto itself in the UK.

This is a tough book, it’s not out there in any kind of numbers. The CGC Census shows only 12 graded and only 4 of these at 9.2 or better. I’ve come across a few of these over the years but all were in lower grade and none lasted very long in my bins at around Guide. So I know firsthand this is a sought after book on this side of the pond perhaps our intrepid reporter Danny Champion can comment on its desirability across the pond.

Back in May of last year one of the 2 CGC 9.4 copies fetched a seemingly piddly $263 at auction.

Today the Doctor Who franchise is stronger than ever, its winning converts daily, I’ve seen this first hand at the shop. I don’t want to tell you how many Phone Booth T-Shirts, IDW Doctor Who graphic novels and Nth Sonic Screwdrivers we’ve sold over the past 6 months. Who does this guy think he is Wolverine?

The current BBC series (the 11th Doctor Who I believe) is a runaway success boasting strong DVD sales internationally and the sky is the limit once the planned major motion picture hits in a couple of years.