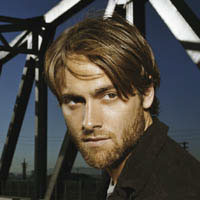 We started hearing rumours that Asgard would need to find a new Fandral.  Ain’t It Cool says that Townsend got fired after arriving to a screen test late. SIX HOURS late. Which is a pretty good way to get your touche kicked to the curb. The official story is that Townsend left over creative differences, but how different could his creative take be on one of the members of The Warriors Three?

This isn’t the first time that Stuart Townsend has been kicked out of an epic fantasy film that is going to be closely nitpicked at. He was originally cast as Aragorn in those Lord of the Rings films. He did a few days of shooting and then was replaced with Viggo Mortensen, Apparently Peter Jackson thought that Aragorn needed to be older. That worked out pretty well for that franchise.

I guess Stuart will comfort himself in the arms of his girlfriend, Charlize Theron. (Thanks Perez!)

Townsend has been replaced by an almost complete unknown, Joshua Dallas, young actor with not much of a profile. Dallas has previously been cast in the sequel to the UK horror classic The Descent, and will also be seen in the upcoming George Lucas-produced Red Tails.

Thor officially starts shooting today. Who here thinks we’ll be getting some official pics sooner rather than later?