Fans of Hockey might have heard about the NHL’s Guardian Project where comic legend Stan Lee turned the mascots of each NHL team into a superhero. What they may not know is how this has produced some of the most cringe worthy moments in superheroes. Hit the link and check out some of the superheroes and their bios. Some are just amazing…The Toronto Maple Leafs mascot Trunk has the following bio:

The Maple Leaf is the largest of all the Guardians. A fact made more obvious when he “grows” infinitely larger as the need arises. His body is composed entirely of wood; essentially he is a living breathing maple tree. Large roots that shoot from his feet enable him to secure himself to any surface by penetrating and forming a foothold.  His branches can stretch from his forearms allowing him to snatch up the enemy or grasp innocent victims in harm’s way. He fires sticky “sap” bombs from his fingertips that trap his opponents like an insect in amber.

On top of all of this, the Maple Leaf has the super ability of chlorokinesis, basically allowing him to communicate with the plant world. The Maple Leaf, or “Trunk” as the rest of the Guardians know him, is one of the funniest of the Guardians. Always quick with a joke or a sarcastic barb, the Maple Leaf often disarms his opponents by bringing levity to tense situations. Don’t let the funny man routine fool you though, because when angered this Guardian can be particularly brutal, and this is no laughing matter.

With all those quotations around “sticky sap” and “grow” did they turn him into a giant woody dick joke? In fact, look at them all and ask yourself what established superhero does this one look like.

The Penguin: It’s Cyclops with a colour swap. 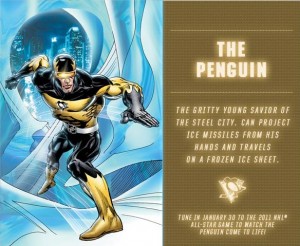 The Canadien: A fusion of Cobra Commander, Iron Man and Optimus Prime 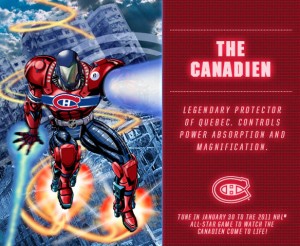 The Oiler: Ok, this guy doesn’t look like anyone I recognize..but COME ON! The dude is friggin’ shooting oil as a weapon? He’s gotta be the most eco-friendly hero out there, right? 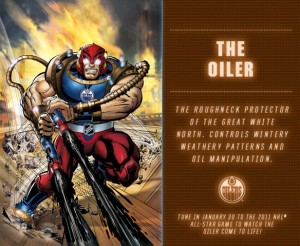 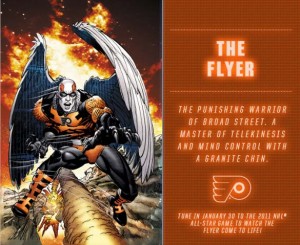 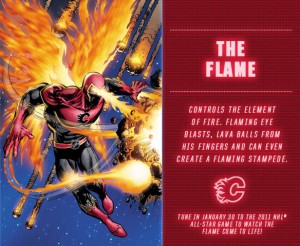 The Canuck: …Batman mated with a whale? 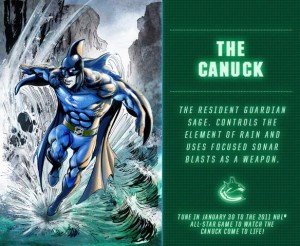 The Red Wing & Blue Jacket: They’re transformers. That’s all. Oh and it looks like Red Wing rides a unicycle into battle? 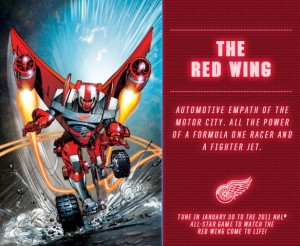 The Coyote: Come on! Try to at least make him not look exactly like Wolverine 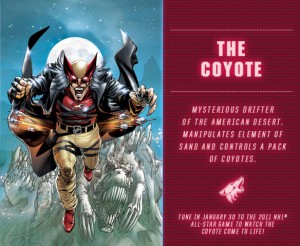 The Panther: The ultimate in laziness. 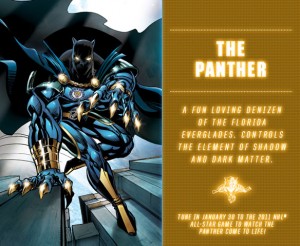 I’m not quite sure what they are trying to accomplish here. Are they trying to get kids interested in hockey and decided that the best way to do that was through superheroes? Because I am not sure if they are aware of this but comic books are still having a bit of trouble getting kids into comic books over video games these days too. They are revealing a new superhero everyday for the month of January and then at the All-Star Game, they will all gather together for some kind of presentation. Tell me what you guys think about this whole whack a doodle thing as right now, I can’t figure out why this exists. Funny thing though: apparently they tried to do this with the NFL before but they wanted to do it with individual players. Well, they decided to squash it as they were worried about the disasters that would occur if the players had problems off the field. One of the players that was originally slated to be a superhero?  Michael Vicks.