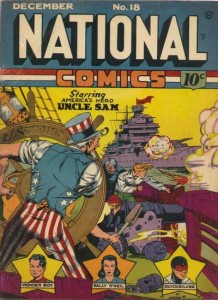 A comic book that will live in infamy! This issue is famous for depicting an attack on Pearl Harbor 1 month before the event actually happened. Notably the book has the Germans doing the attacking. For Americans all they have to hear is December 7th 1941 and immediately they think of Pearl Harbor. The only other date remembered in such a way is September 11th 2001. This comic is unique in its connection to such an important date in U.S. history; history buffs as well as comic book collectors covet this issue.

National Comics is a title that should command a lot more respect than it is getting. The series ran for over 9 years and covered 75 issues. Non other than Will Eisner launched the title in July 1940. It was Eisner that created Uncle Sam.  Uncle Sam, Wonder Boy and Quicksilver are all solid characters; Quicksilver is now in the DC stable of characters and goes by Max Mercury.

When I compare this comic book’s Overstreet Price Guide value to DC and Timely books coming out at the same time I get a sense on injustice. First off, I’ve gone to a lot of conventions in my day and I’ve seen and owned many a Batman #18 and Superman #18 but I honestly don’t even remember if I’ve ever seen a National Comics #18. If I do come across one, it’s mine!